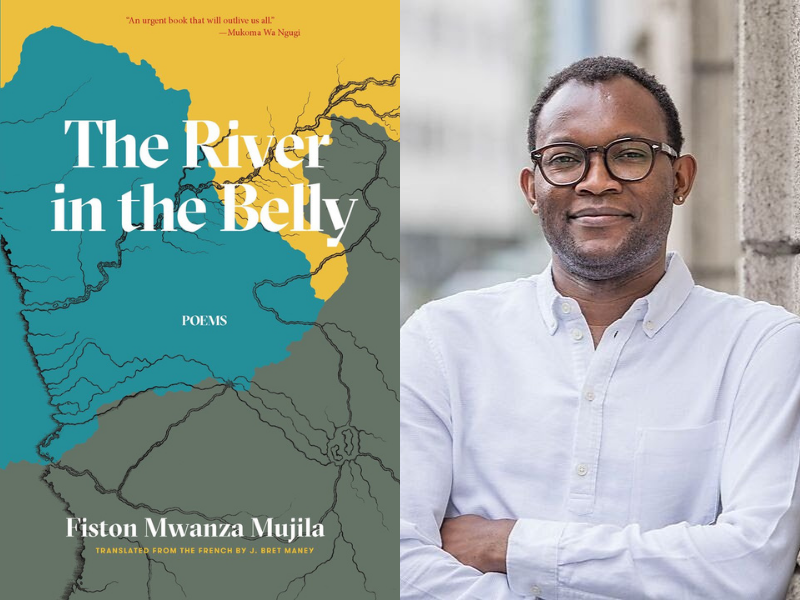 Join the Transnational Literature Series at Brookline Booksmith for a virtual event with author Fiston Mwanza Mujila and translator J. Bret Maney to discuss and celebrate the release of The River in the Belly: Poems.

A moving lyric meditation on the Congo River that explores the identity, chaos, and wonder of the Democratic Republic of Congo as well as race and the detritus of colonialism.

With The River in the Belly, award-winning Congolese author Fiston Mwanza Mujila seeks no less than to reinitiate the Congo River in the imaginary of European languages. Through his invention of the “solitude”—a short poetic form lending itself to searing observation and troubled humor, prone to unexpected tonal shifts and lyrical u-turns—the collection celebrates, caresses, and chastises Central Africa’s great river, the world’s second largest by discharge volume.

Drawing inspiration from sources as diverse as Soviet history, Congolese popular music, international jazz, and everyday life in European exile, Mwanza Mujila has fashioned a work that can speak to the extraordinary hopes and tragedies of post-independence Democratic Republic of the Congo while also mining the generative yet embattled subject position of the African diasporic writer in Europe longing for home. Fans of Tram 83 will rediscover in River the incandescent, improvisatory verbal energy that so dazzled them in Mwanza Mujila’s English-language debut.

Fiston Mwanza Mujila was born in the Democratic Republic of Congo in 1981 and lives today in Austria. His debut novel, Tram 83, translated by Roland Glasser and published in English in 2015 by Deep Vellum, won the German International Literature Award and was longlisted for the International Man Booker and the Prix du Monde. In addition to The River in the Belly, he is the author of the poetry collections Craquelures (2011) and Soleil privé de mazout (2016), and three plays, Et les moustiques sont des fruits à pépins, Te voir dressé sur tes deux pattes ne fait que mettre de l'huile sur le feu (2015) and Zu der Zeit der Königinmutter (2018). His writing responds to political turbulence in his native country and frequently foregrounds its debt to jazz. His second novel, The Villain’s Dance, was published in France in 2020 and is forthcoming in English translation from Deep Vellum.

J. Bret Maney is a literary critic and translator from French and Spanish. He is a recipient of several awards, including the 2020 Gulf Coast Translation Prize for his translations of Fiston Mwanza Mujila’s poetry and an International Latino Book Award and PEN/Heim Translation Fund Grant for his translation of Guillermo Cotto-Thorner’s novel, Manhattan Tropics (Arte Público, 2019), which he also co-edited. He is Assistant Professor of English at Lehman College, City University of New York.