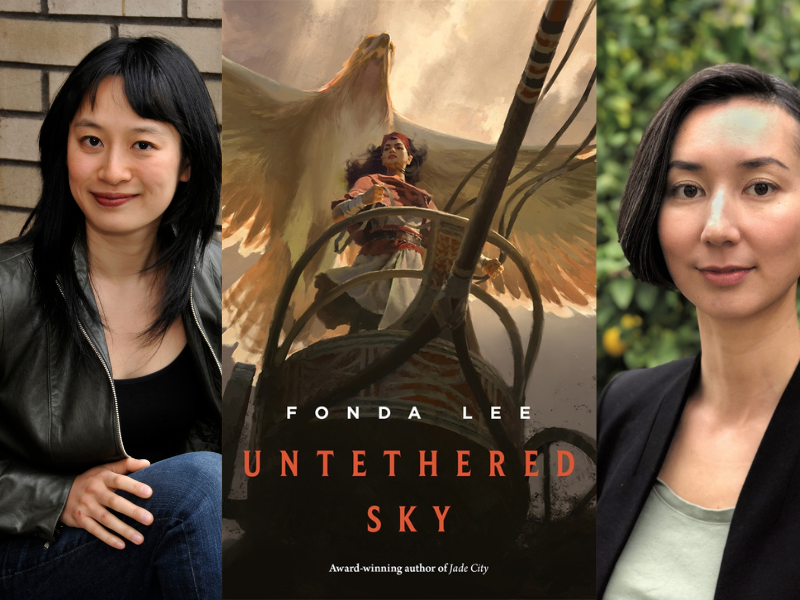 Celebrate the release of Untethered Sky with author Fonda Lee, in conversation with Andrea Stewart!

From World Fantasy Award-winning author Fonda Lee comes Untethered Sky, an epic fantasy fable about the pursuit of obsession at all costs.

Ester’s family was torn apart when a manticore killed her mother and baby brother, leaving her with nothing but her father’s painful silence and a single, overwhelming need to kill the monsters that took her family.

Ester’s path leads her to the King’s Royal Mews, where the giant rocs of legend are flown to hunt manticores by their brave and dedicated ruhkers. Paired with a fledgling roc named Zahra, Ester finds purpose and acclaim by devoting herself to a calling that demands absolute sacrifice and a creature that will never return her love. The terrifying partnership between woman and roc leads Ester not only on the empire’s most dangerous manticore hunt, but on a journey of perseverance and acceptance.

Fonda Lee is the World Fantasy Award-winning author of the epic fantasy Green Bone Saga, consisting of Jade City, Jade War, and Jade Legacy. She is also the author of the acclaimed young adult science fiction novels Zeroboxer, Exo and Cross Fire. Fonda is a winner of the Locus Award, a four-time winner of the Aurora Award, and a finalist for the Nebula Award and Hugo Award. The Green Bone Saga has been translated into a dozen languages and named to TIME Magazine’s Top 100 Fantasy Books of All Time. A black belt martial artist and former corporate strategist, she resides in the Pacific Northwest.

Andrea Stewart is the daughter of immigrants, and was raised in a number of places across the United States. Her parents always emphasized science and education, so she spent her childhood immersed in Star Trek and odd-smelling library books. When her (admittedly ambitious) dreams of becoming a dragon slayer didn't pan out, she instead turned to writing books. She now lives in sunny California, and in addition to writing, can be found herding cats, looking at birds, and falling down research rabbit holes.