Frances Moore Lappé with Raj Patel: 50 Years of Diet for a Small Planet

Frances Moore Lappé with Raj Patel: 50 Years of Diet for a Small Planet 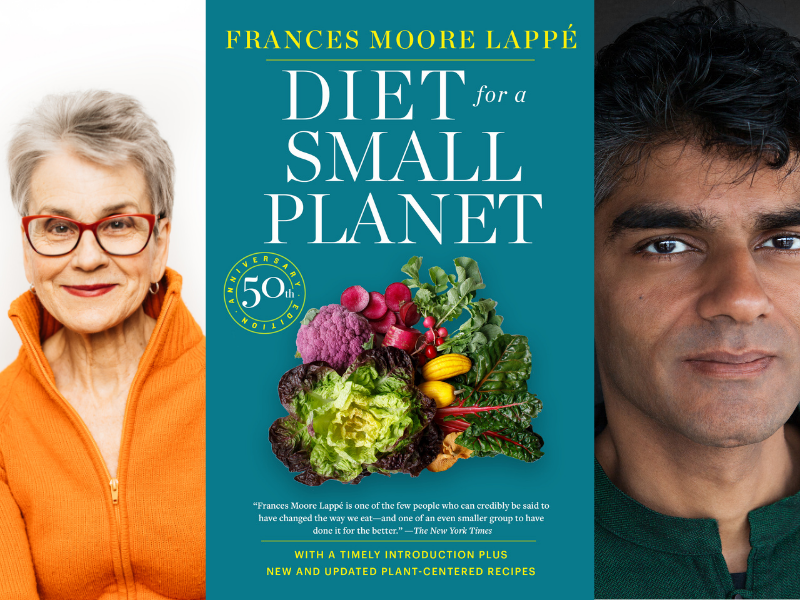 Celebrate the fiftieth anniversary of the seminal Diet for a Small Planet with author Frances Moore Lappé, in conversation with Raj Patel!

“Frances Moore Lappé is one of the few people who can credibly be said to have changed the way we eat—and one of an even smaller group to have done it for the better.”—The New York Times

In 1971, Diet for a Small Planet broke new ground, revealing how our everyday acts are a form of power to create health for ourselves and our planet. This extraordinary book first exposed the needless waste built into a meat-centered diet. Now, in a special edition for its 50th anniversary, world-renowned food expert Frances Moore Lappé goes even deeper, showing us how plant-centered eating can help restore our damaged ecology, address the climate crisis, and move us toward real democracy. Sharing her personal journey and how this revolutionary book shaped her own life, Lappé offers a fascinating philosophy on changing yourself—and the world—that can start with changing the way we eat.

Frances Moore Lappé is the author or co-author of twenty books about world hunger, living democracy, and the environment, beginning with the three-million-copy Diet for a Small Planet in 1971. She has been featured on the Today show, Hardball with Chris Matthews, Fox & Friends, The Wall Street Journal, NPR, the CBC and BBC, and other news outlets. Frances is the cofounder of three organizations including the Oakland-based think tank Food First and the Small Planet Institute, which she leads with her daughter, Anna Lappé. The pair also cofounded the Small Planet Fund, which channels resources to democratic social movements worldwide.

Raj Patel is an award-winning author, film-maker and academic. He is a Research Professor in the Lyndon B Johnson School of Public Affairs at the University of Texas, Austin. He has degrees from the University of Oxford, the London School of Economics and Cornell University, has worked for the World Bank and WTO, and protested against them around the world. In addition to scholarly publications in economics, philosophy, politics and public health journals, he regularly writes for The Guardian, and has contributed to the Financial Times, Los Angeles Times, New York Times, Times of India, The San Francisco Chronicle, The Mail on Sunday, and The Observer. His first book was Stuffed and Starved: The Hidden Battle for the World Food System. His acclaimed latest book, co-authored with Rupa Marya, is entitled Inflamed: Deep Medicine and The Anatomy of Injustice. His first film, co-directed with Zak Piper, is the award-winning documentary The Ants & The Grasshopper. He can be heard co-hosting the food politics podcast The Secret Ingredient with Mother Jones’ Tom Philpott, and KUT’s Rebecca McInroy.