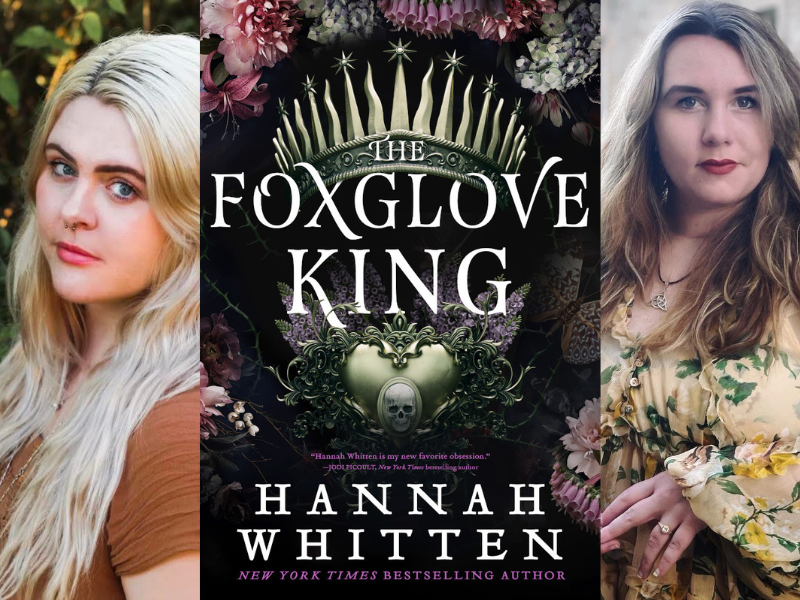 In person at Brookline Booksmith! Celebrate the release of The Foxglove King with author Hannah Whitten, in conversation with S.T. Gibson.

Tickets are required for this event. Your ticket includes entrance to the event AND a copy of The Foxglove King.

You will also be alerted to important details about the program, including safety requirements, cancellations, and book signing updates.

In this lush, romantic epic fantasy series from a New York Times bestselling author, a young woman’s secret power to raise the dead plunges her into the dangerous and glamorous world of the Sainted King’s royal court.

When Lore was thirteen, she escaped a cult in the catacombs beneath the city of Dellaire. And in the ten years since, she’s lived by one rule: don’t let them find you. Easier said than done, when her death magic ties her to the city.

Mortem, the magic born from death, is a high-priced and illicit commodity in Dellaire, and Lore’s job running poisons keeps her in food, shelter, and relative security. But when a run goes wrong and Lore’s power is revealed, she’s taken by the Presque Mort, a group of warrior-monks sanctioned to use Mortem working for the Sainted King. Lore fully expects a pyre, but King August has a different plan. Entire villages on the outskirts of the country have been dying overnight, seemingly at random. Lore can either use her magic to find out what’s happening and who in the King’s court is responsible, or die.

Lore is thrust into the Sainted King’s glittering court, where no one can be believed and even fewer can be trusted. Guarded by Gabriel, a duke-turned-monk, and continually running up against Bastian, August’s ne'er-do-well heir, Lore tangles in politics, religion, and forbidden romance as she attempts to navigate a debauched and opulent society.

But the life she left behind in the catacombs is catching up with her. And even as Lore makes her way through the Sainted court above, they might be drawing closer than she thinks.

Hannah Whitten has been writing to amuse herself since she could hold a pen, and sometime in high school, she figured out that what amused her might also amuse others. When she's not writing, she's reading, making music, or attempting to bake. She lives in Tennessee with her husband and children in a house ruled by a temperamental cat.

Moderator S.T. Gibson is an author, literary agent, and village wise woman in training. She currently lives in Boston with her fiance, spoiled Persian cat, and vintage blazer collection.