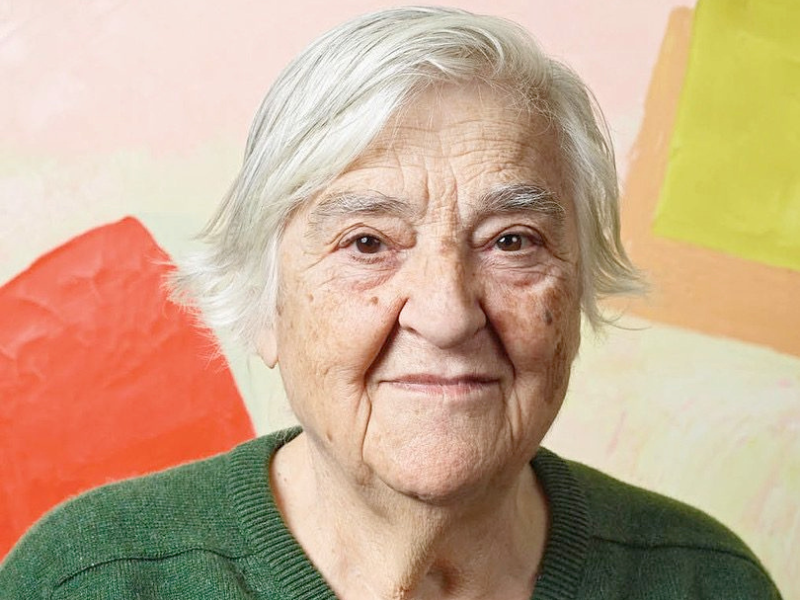 Join Literatures of Annihilation, Exile, and Resistance for a virtual event in remembrance of Etel Adnan, the beloved Lebanese-American poet, essayist, and visual artist, who passed away in November 2021. She is survived by her longtime partner, renowned Syrian Lebanese artist Simone Fattal. The event will include Joana Hadjithomas, Khalil Joreige, Alison Rice, and Ammiel Alcalay in conversation with Hana Morgenstern

Joana Hadjithomas and Khalil Joreige are a duo of artists and filmmakers whose work creates thematic and formal links between photography, video, performance, installation, sculpture and cinema, documentary or fiction film. Their latest film, Memory Box (2021), has been selected for the Berlinale and was released in more than 40 countries. Their films also include Ismyrna (2016), The Lebanese Rocket Society (2012), Je Veux Voir (2008), and A Perfect Day (2005). Several film retrospectives have been presented in renowned institutions such as Flaherty Seminar (New York), Torino Film Festival, International Film Festival of Gijon (Spain), Harvard Film Archive (Cambridge), Lincoln Center (New York), Locarno International Film Festival (Switzerland), MoMA (New York), Paris Cinema, Tate Modern (London), Visions du réel (Nyon), la Rochelle (France). As for their art practice, Joana Hadjithomas & Khalil Joreige have been awarded several prizes, including the Marcel Duchamp Prize in 2017 for their project Unconformities. They have been exhibited in numerous museums and their artworks are part of many important public and private collections.

Alison Rice is Chair of the Department of Romance Languages and Literatures at Notre Dame. She specializes in 20th- and 21st-century French and Francophone literature and film. Her first book, Time Signatures: Contextualizing Contemporary Francophone Autobiographical Writing from the Maghreb (Lexington Books 2006), closely examines the work of Hélène Cixous, Assia Djebar, and Abdelkébir Khatibi. Her second book, Polygraphies: Francophone Women Writing Algeria (University of Virginia Press, 2012), focuses on autobiographical writings by seven prominent Francophone women writers from Algeria. She is the editor of a forthcoming volume titled Transpositions: Migration, Translation, Music (Liverpool University Press, 2021) that explores a wide range of innovations in Francophone film, literature, theater, and art. Her current book project, inspired by a series of filmed interviews she conducted in Paris, constitutes an in-depth examination of the present proliferation of women writers of French from around the world.

Poet, novelist, translator, critic, and scholar Ammiel Alcalay teaches at Queens College and The Graduate Center, CUNY. His books include After Jews and Arabs, Memories of Our Future, Islanders, neither wit nor gold: from then, from the warring factions, and a little history. Recent books include the co-edited A Dove in Flight: Poems by Faraj Bayrakdar, with Shareah Taleghani and the New York Translation Collective; a poem sequence, Ghost Talk, and A Bibliography for After Jews & Arabs. He has written and been active on the question of Palestine for decades and, during the wars in ex-Yugoslavia, he was one of the main conduits for translations from Bosnia. He is a contributing editor of The Markaz Review and was given a 2017 American Book Award from The Before Columbus Foundation for his work as founder and General Editor of Lost & Found: The CUNY Poetics Document Initiative.

The conversation will be moderated by scholar, writer and translator Hana Morgenstern. Morgenstern is Associate Professor in Postcolonial and Middle East Literature at the University of Cambridge and a Fellow at Newnham College. She is co-director of the Revolutionary Papers projects, co-convener of the Archives of the Disappeared and Literatures of Annihilation, Exile, and Resistance research seminars, and convener of the Postcolonial Paper at the Faculty of English, University of Cambridge. She is currently at work on a book manuscript titled “Cultural Co-resistance in Palestine/Israel: Collaboration Under Colonialism.”