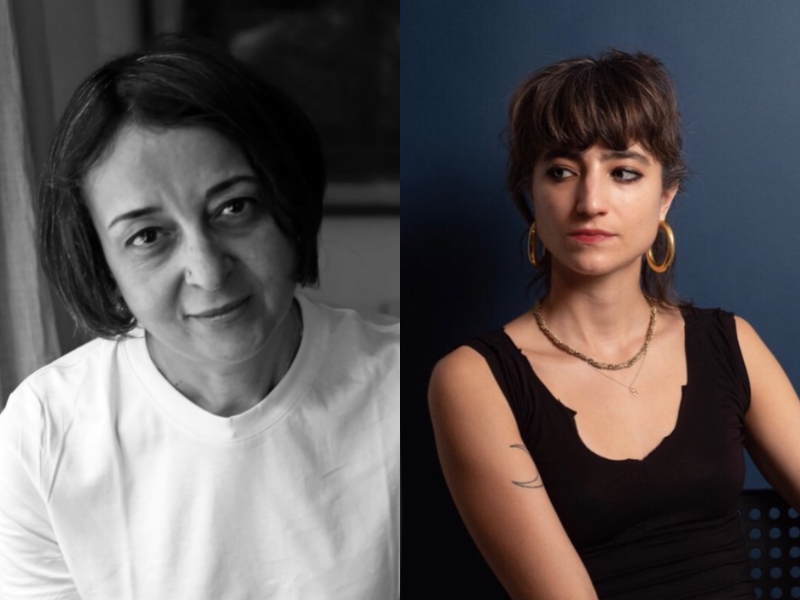 Join the Transnational Literature Series at Brookline Booksmith for an in-store event with poets Iman Mersal and Sara Deniz Akant to discuss and celebrate their work. They will be reading from their new collections The Threshold and Hyperphantasia.

Iman Mersal is Egypt’s—indeed, the Arab world’s—great outsider poet. Over the past three decades, she has crafted a voice that is ferocious and tender, street-smart and vulnerable. Her early work captures the energies of Cairo’s legendary literary bohème, a home for “Lovers of cheap weed and awkward confessions / Anti-State agitators” and “People like me.” These are poems of wit and rage, freaked by moments of sudden beauty, like “the smell of guava” mysteriously wafting through the City of the Dead. Other poems bear witness to agonizing loss and erotic temptation, “the breath of two bodies that never had enough time / and so took pleasure in their mounting terror.” Mersal’s most recent work illuminates the trials of displacement and migration, as well as the risks of crossing boundaries, personal and political, in literature and in life.

The Threshold gathers poems from Mersal’s first four collections of poetry: A Dark Alley Suitable for Dance Lessons, Walking as Long as Possible, Alternative Geography, and Until I Give Up the Idea of Home. Taken together, these works chart a poetic itinerary from defiance and antagonism to the establishment of a new, self-created sensibility. At their center is the poet: indefatigably intelligent, funny, flawed, and impossible to pin down. Translated by Robyn Creswell. A former poetry editor of The Paris Review, he teaches Arabic literature at Yale University

Iman Mersal is the author of several books of poems and a collection of essays, How to Mend: Motherhood and Its Ghosts. In English translation, her poems have appeared in The Paris Review, The New York Review of Books, The Nation, and other publications. Her most recent prose work, Traces of Enayat, received the Sheikh Zayed Book Award for Literature in 2021. She is a professor of Arabic language and literature at the University of Alberta, Canada.

Sara Deniz Akant's Hyperphantasia explodes the sonnet's sonic and imaginative capabilities via infestation dreams, open tabs, and other disruptive forms of longing and (dis)belonging: the epistolary, epic, ballad, or just "some oracle shit" (history). Phanta—our AI BFF, echoing troll, or spiritual center—sweetly sings a "nekromantic soundtrack" into the reader's ear through the "holographic non-place" of dove-robots, sleeping boyfriends, murderous grooms, and empty code. In these broken songs, "the women haunt themselves" through the quotidian trappings of daily routine: unanswered letters, dreamscapes, and ritualized obsessions.

And yet, Akant's celebratory second collection refuses to make precious bores of gender, grief, lust, or life. Just like the eponymous hero and prismatic villain of Phanta herself, the trash in these poems not only "sucks our hunger dry" but also "multiplies" in an attempt to reclaim the (often damning) myths that surround the culturally mixed, feminized body.

Sara Deniz Akant is a Turkish-American poet, educator, and performer. She is the author of Hyperphantasia, listed as one of the Best Books of the year by the New York Times and the Boston Globe; Babette, winner of the Black Box Poetry Prize; Parades, winner of the Chapbook Poetry Prize; and Latronic Strag. She teaches poetry as the Professor of the Practice at Tufts University and co-curates the Kan Ya Makan reading series in Brooklyn.