Jesse Q. Sutanto with Ali Hazelwood: Well, That Was Unexpected

Jesse Q. Sutanto with Ali Hazelwood: Well, That Was Unexpected 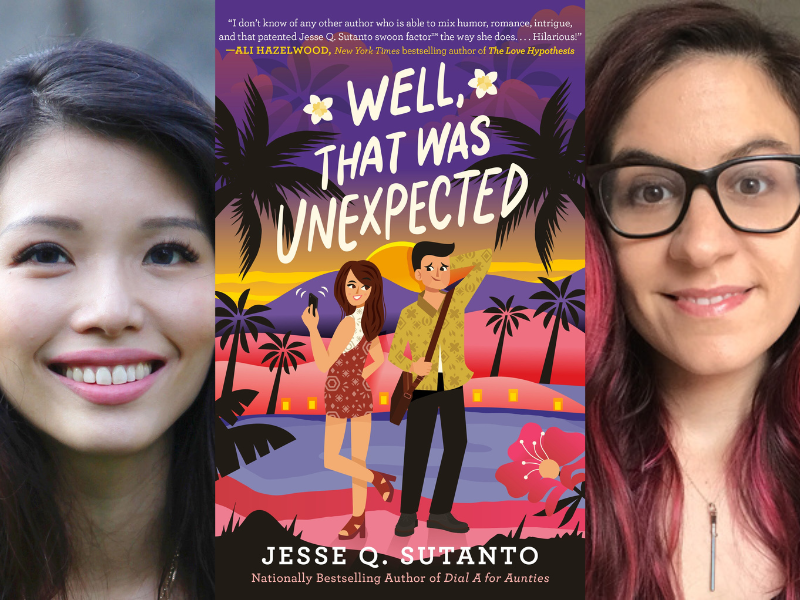 Celebrate the release of Well, That Was Unexpected with author Jesse Q. Sutanto, in conversation with Ali Hazelwood!

"A delightful, hilarious, captivating love letter to Indonesia, and coming of age in a large meddlesome family, and the thrill of finding your person where you least expect it!"--Ali Hazelwood, New York Times bestselling author of The Love Hypothesis

A laugh-out-loud YA rom-com about a girl who's whisked from LA to her mother's native Indonesia to get back to her roots and finds herself fake-dating the son of one of the wealthiest families there, from the bestselling author of Dial A for Aunties and The Obsession.

After Sharlot Citra's mother catches her in a compromising position, she finds herself whisked away from LA to her mother’s native Indonesia. It'll be exactly what they both need. Or so her mother thinks.

When George Clooney Tanuwijaya's father (who is obsessed with American celebrities) fears he no longer understands how to get through to his son, he decides to take matters into his own hands.

To ensure that their children find the right kind of romantic partner, Sharlot's mother and George's father do what any "good" parent would do: they strike up a conversation online, pretending to be their children.

When the kids find out about their parents’ actions, they’re horrified. Not even a trip to one of the most romantic places on earth could possibly make Sharlot and George fall for each other. But as the layers peel back and the person they thought they knew from online is revealed, the truth becomes more complicated. As unlikely as it may seem, did their parents manage to find their true match after all?

Jesse Q Sutanto is the author of the YA thriller The Obsession and the adult romcom Dial A for Aunties. She grew up shuttling back and forth between Indonesia, Singapore, and Oxford and considers all three places her home. She has a master’s from Oxford University, but she has yet to figure out how to say that without sounding obnoxious. Jesse has forty-two first cousins and thirty aunties and uncles, many of whom live just down the road. She used to game, but with two little ones and a husband, she no longer has time for hobbies. She aspires to one day find one (1) hobby. Visit her online at jesseqsutanto.com and on Twitter @thewritinghippo.

Moderator Ali Hazelwood is the New York Times bestselling author of The Love Hypothesis, as well as a writer of peer-reviewed articles about brain science, in which no one makes out and the ever after is not always happy. Originally from Italy, she lived in Germany and Japan before moving to the U.S. to pursue a Ph.D. in neuroscience. She recently became a professor, which absolutely terrifies her. When Ali is not at work, she can be found running, eating cake pops, or watching sci-fi movies with her two feline overlords (and her slightly-less-feline husband).