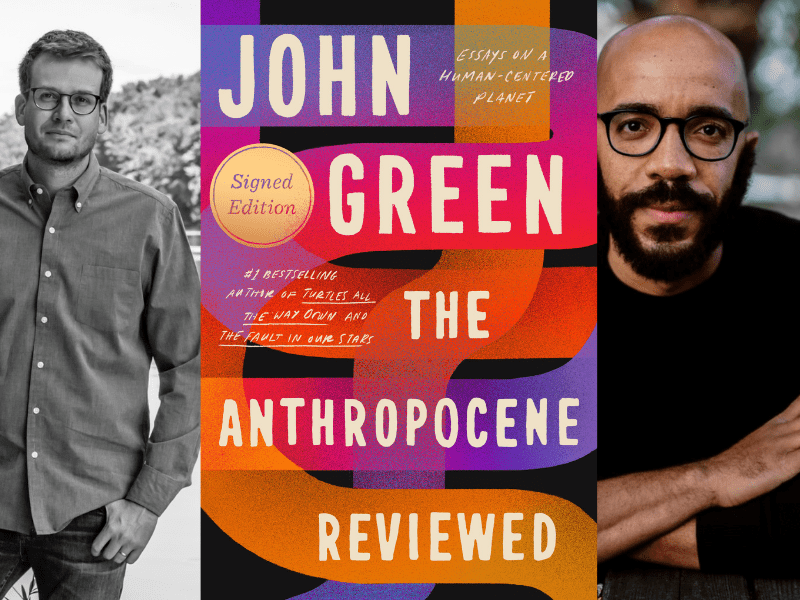 Join us and the Wilbur Theatre, in partnership with Gibson's and Community bookstores, for a virtual event celebrating The Anthropocene Reviewed with author John Green, moderated by Clint Smith III.

Every ticket comes with a signed copy of the book!

The Anthropocene is the current geologic age, in which humans have profoundly reshaped the planet and its biodiversity. In this remarkable symphony of essays adapted and expanded from his groundbreaking podcast, bestselling author John Green reviews different facets of the human-centered planet on a five-star scale—from the QWERTY keyboard and sunsets to Canada geese and Penguins of Madagascar.

Funny, complex, and rich with detail, the reviews chart the contradictions of contemporary humanity. As a species, we are both far too powerful and not nearly powerful enough, a paradox that came into sharp focus as we faced a global pandemic that both separated us and bound us together.

John Green’s gift for storytelling shines throughout this masterful collection. The Anthropocene Reviewed is a open-hearted exploration of the paths we forge and an unironic celebration of falling in love with the world.

John Green is the award-winning, #1 bestselling author of books including Looking for Alaska, The Fault in Our Stars, and Turtles All the Way Down. His books have received many accolades, including a Printz Medal, a Printz Honor, and an Edgar Award. John has twice been a finalist for the LA Times Book Prize and was selected by TIME magazine as one of the 100 Most Influential People in the World. He is also the writer and host of the critically acclaimed podcast The Anthropocene Reviewed. With his brother, Hank, John has co-created many online video projects, including Vlogbrothers and the educational channel Crash Course. He lives with his family in Indianapolis, Indiana. You can visit John online at johngreenbooks.com.

Moderator Clint Smith is staff writer at The Atlantic. He is the author of Counting Descent, which won the 2017 Literary Award for Best Poetry Book from the Black Caucus of the American Library Association and was a finalist for an NAACP Image Award. Clint has received fellowships from New America, the Art For Justice Fund, Cave Canem, and the National Science Foundation. His writing has been published in The New Yorker, The New York Times Magazine, Poetry Magazine, The Paris Review and elsewhere. He currently teaches writing and literature at the DC Central Detention Facility. His debut nonfiction book How the Word Is Passed, which explores how different historical sites reckon with—or fail to reckon with—their relationship to the history of slavery, will be published by Little, Brown this June. He received his B.A. in English from Davidson College and his Ph.D. in Education from Harvard University.