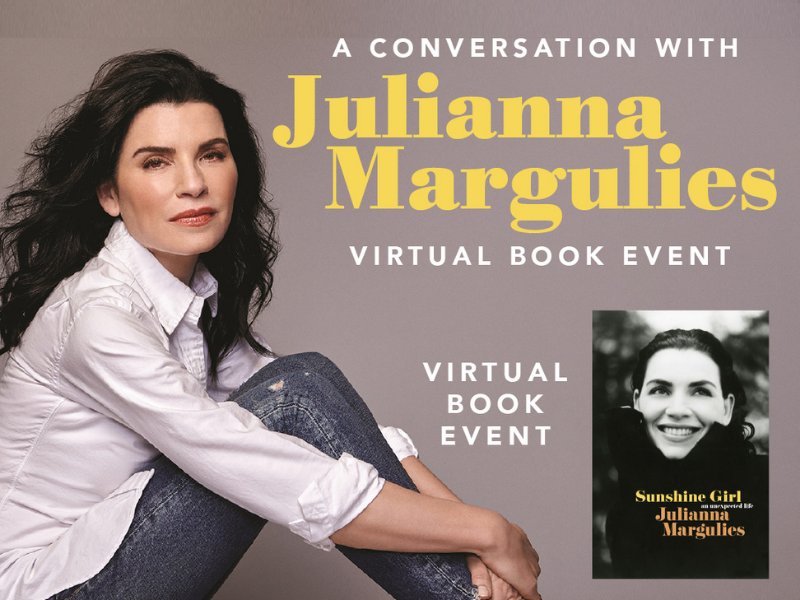 Join Brookline Booksmith and the Wilbur Theatre for a virtual event with Julianna Margulies for her memoir Sunshine Girl: An Unexpected Life. Tickets come with a signed copy of the book!

As an Emmy, Golden Globe, and Screen Actors Guild award winner, Julianna Margulies has achieved success in television, theater, and film. Margulies starred as Alicia Florrick on the long-running hit CBS show The Good Wife, which she also produced, and is also well known for her role as one of the original cast members of ER. More recently, Margulies has starred on critically acclaimed series includingThe Morning Show, Billions, and The Hot Zone. She has been involved with Project ALS and Erin’s Law and is also a board member of the New York City–based MCC Theater company. She resides in New York City with her husband and son.

As an apple-cheeked bubbly child, Julianna was bestowed with the family nickname “Sunshine Girl.” Shuttled back and forth between her divorced parents, often on different continents, she quickly learned how to be of value to her eccentric mother and her absent father. Raised in fairly unconventional ways in various homes in Paris, England, New York, and New Hampshire, Julianna found that her role among the surrounding turmoil and uncertainty was to comfort those around her, seeking organization among the disorder, making her way in the world as a young adult and eventually an award-winning actress.