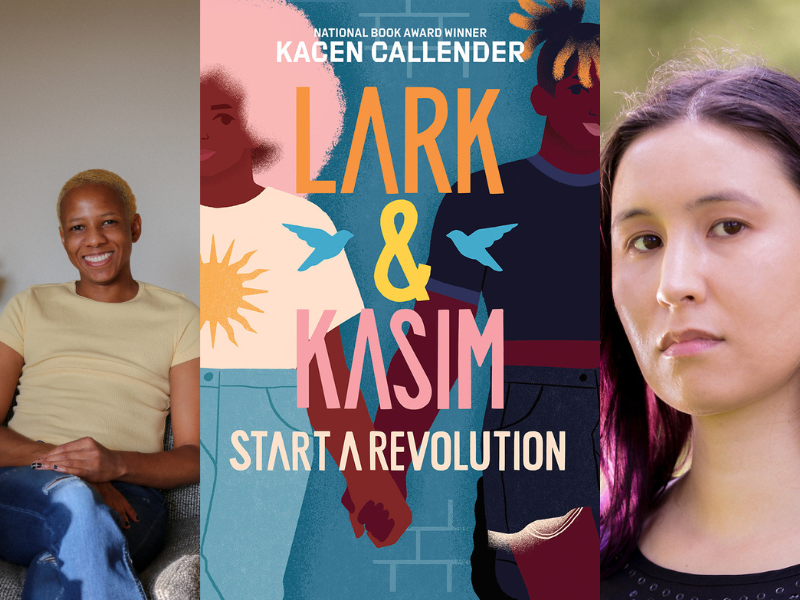 Celebrate the release of Lark & Kasim Start a Revolution with author Kacen Callender, in conversation with Rebecca Kim Wells!

From National Book Award–winner Kacen Callender, a contemporary YA that follows Lark's journey to speak the truth and discover how their own self-love can be a revolution

Lark Winters wants to be a writer, and for now that means posting on their social media accounts––anything to build their platform. When former best friend Kasim accidentally posts a thread on Lark's Twitter declaring his love for a secret, unrequited crush, Lark's tweets are suddenly the talk of the school—and beyond. To protect Kasim, Lark decides to take the fall, pretending they accidentally posted the thread in reference to another classmate. It seems like a great idea: Lark gets closer to their crush, Kasim keeps his privacy, and Lark's social media stats explode. But living a lie takes a toll—as does the judgment of thousands of Internet strangers. Lark tries their best to be perfect at all costs, but nothing seems good enough for the anonymous hordes––or for Kasim, who is growing closer to Lark, just like it used to be between them . . .

In the end, Lark must embrace their right to their messy emotions and learn how to be in love.

Kacen Callender is the bestselling and award-winning author of multiple novels for children, teens, and adults, including the Stonewall Honor Book Felix Ever After and the National Book Award for Young People's Literature King and the Dragonflies. Callender enjoys playing RPG video games, practicing their art, and focusing on healing and growth in their free time.

Moderator Rebecca Kim Wells writes books full of magic and fury (and often dragons). Her debut novel Shatter the Sky was a New England Book Award finalist, a Bisexual Book Award winner, an ALA Rainbow Book List title, an Indies Introduce title, and a Kids’ Indie Next Pick. She is also the author of Storm the Earth and Briar Girls, published by Simon & Schuster Books for Young Readers. If she were a hobbit, she would undoubtedly be a Took.