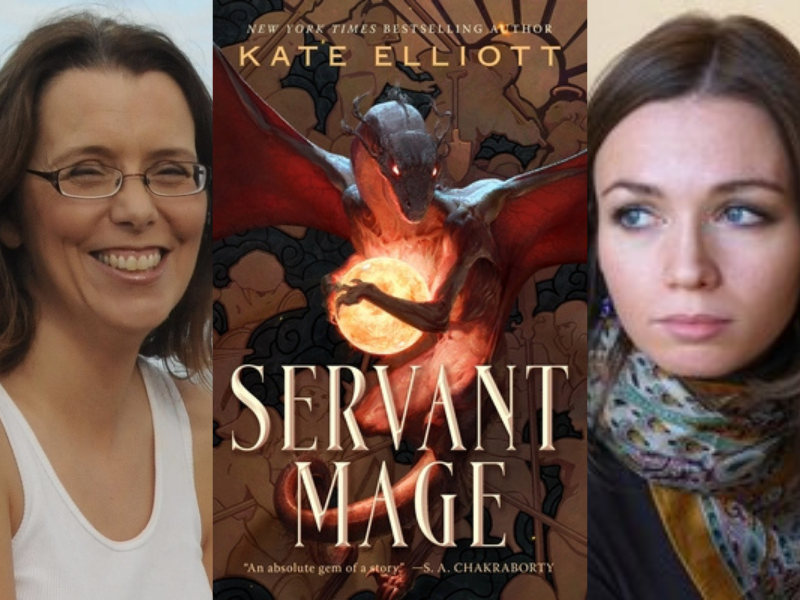 Celebrate the release of Servant Mage with author Kate Elliott, in conversation with S.A. Chakraborty.

In Kate Elliott's Servant Mage, a lowly fire mage finds herself entangled in an empire-spanning conspiracy on her way to discovering her true power.

Fellian is a Lamplighter, able to provide illumination through magic. A group of rebel Monarchists free her from indentured servitude and take her on a journey to rescue trapped compatriots from an underground complex of mines.

Along the way they get caught up in a conspiracy to kill the latest royal child and wipe out the Monarchist movement for good. But Fellian has more than just her Lamplighting skills up her sleeve…

Kate Elliott has been writing science fiction and fantasy for 30 years, after bursting onto the scene with Jaran. She is best known for her Crown of Stars epic fantasy series and the New York Times bestselling YA fantasy Court of Fives. Elliot's particular focus is immersive world-building & centering women in epic stories of adventure, amidst transformative cultural change. She lives in Hawaii, where she paddles outrigger canoes & spoils her Schnauzer.

Shannon Chakraborty is the author of the critically acclaimed and internationally best-selling The Daevabad Trilogy. Her work has been translated into over a dozen languages and nominated for the Hugo, Locus, World Fantasy, Crawford, Igynte and Astounding awards. You can find her online at www.sachakraborty.com or on Twitter and Instagram at @SAChakrabooks, where she likes to talk about history, politics, and Islamic art.