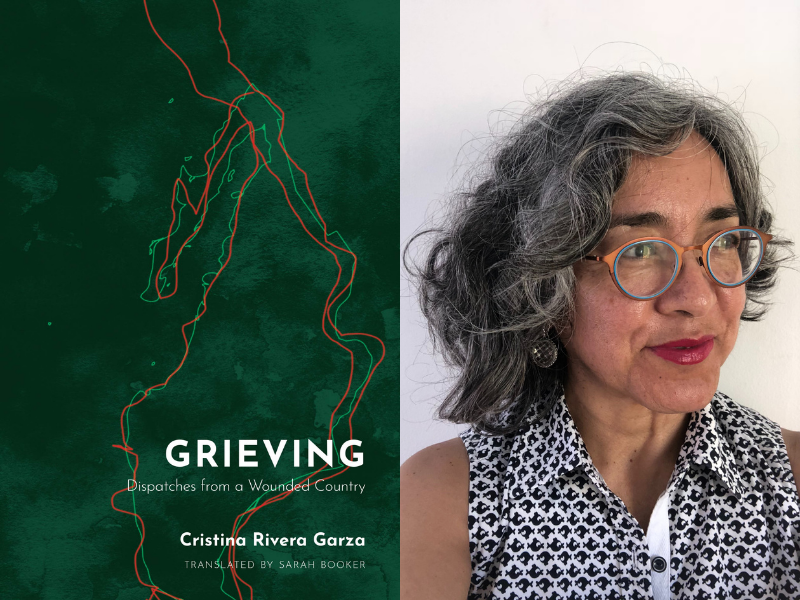 You can watch a recording of this event, along with other virtual Transnational Series events, on our YouTube channel.

In partnership with Deep Vellum Books.

Grieving is Cristina Rivera Garza's hybrid collection of short crónicas, journalism, and personal essays on systemic violence in contemporary Mexico and along the US-Mexico border. Drawing together horror theory and historical analysis, she outlines how neoliberalism, corruption, and drug trafficking—culminating in the misnamed "war on drugs"—has shaped the political landscape on both sides of the border. Working from and against this context, Rivera Garza posits that collective grief is an act of resistance against state violence, and that writing is a powerful mode of seeking social justice and embodying resilience.

She states: "As we write, as we work with language—the humblest and most powerful force available to us—we activate the potential of words, phrases, sentences. Writing as we grieve, grieving as we write: a practice able to create refuge from the open. Writing with others. Grieving like someone who takes refuge from the open. Grieving, which is always a radically different mode of writing."

Cristina Rivera Garza is an award-winning writer, poet, translator, and critic. She is the recipient of the Roger Caillois and Anna Seghers Prizes, and the only two-time winner of the Sor Juana Inés de la Cruz Prize. She is currently distinguished professor of Hispanic studies at the University of Houston.

Translator Sarah Booker is a doctoral candidate at the University of North Carolina at Chapel Hill, where she focuses on contemporary Latin American literature and translation studies. Her translations have appeared in The Paris Review, Asymptote, and The Brooklyn Rail, among others.

Moderator Lina Meruane is an award-winning Chilean writer and scholar. She has published a host of short stories and five novels. Translated by Megan McDowell into English are her latest: Seeing Red, which was awarded The Premio Valle Inclan Prize for translation, and Nervous System. Meruane has written several non-fiction books, among which is her essay on the impact and representation of the AIDS epidemic in Latin American literature, Viral Voyages. She received the prestigious Sor Juana Inés de la Cruz Novel Prize (Mexico 2012), the Anna Seghers Prize (Germany, 2011) as well as grants from the Guggenheim Foundation, the National Endowment for the Arts, and a DAAD Writer in Residence in Berlin. She currently teaches Global cultures and Creative Writing at New York University.

About our bookstore partner:

Deep Vellum Books is a bookstore in Dallas, Texas that specializes in international literature, independent presses, and marginalized writers.