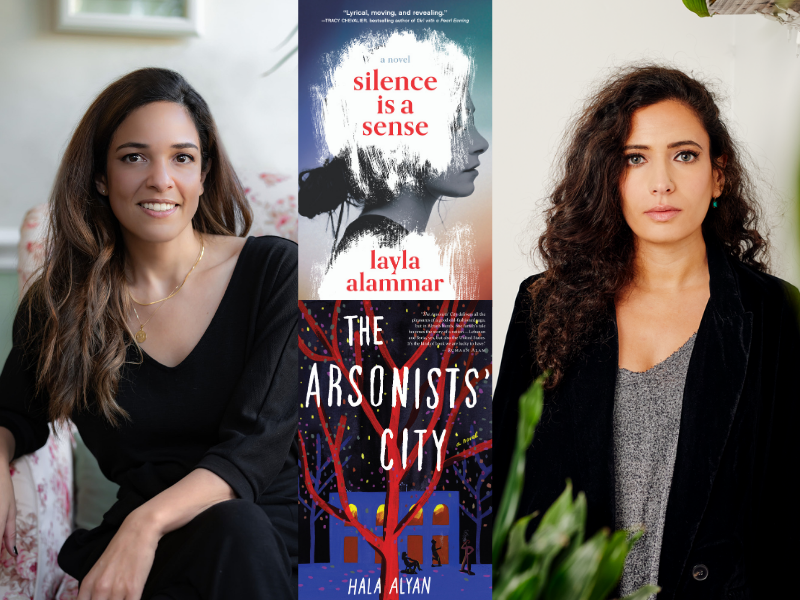 Join the Transnational Literature Series for a virtual event with Layla AlAmmar and Hala Alyan to discuss their new books Silence Is a Sense and The Arsonists’ City. They'll be in conversation with poet Jess Rizkallah.

A young woman sits in her apartment, watching the small daily dramas of her neighborhood. She is an outsider, a mute voyeur, safe behind her windows, and she sees it all. Journeying from her war-torn Syrian homeland to this unnamed British city has traumatized her into silence, and her only connection to the world is the column she writes for a magazine under the pseudonym “the Voiceless,” where she tries to explain the refugee experience without sensationalizing it—or revealing anything about herself.

Gradually, though, the boundaries of her world expand. When an anti-Muslim hate crime rattles the neighborhood, she has to make a choice: Will she remain a voiceless observer, or become an active participant in a community that, despite her best efforts, is quickly becoming her own? Silence is a Sense is a complex and fluid book about memory, revolution, loss, and safety.

Layla AlAmmar is a writer and academic from Kuwait. She was the 2018 British Council international writer in residence at the Small Wonder Short Story Festival. Her debut novel, The Pact We Made, was published in 2019. She has written for The Guardian and ArabLit Quarterly. She is currently pursuing a PhD on the intersection of Arab women's fiction and literary trauma theory.

The Nasr family is spread across the globe—Beirut, Brooklyn, Austin, the California desert. A Syrian mother, a Lebanese father, and three American children: all have lived a life of migration. Still, they’ve always had their ancestral home in Beirut—a constant touchstone—and the complicated, messy family love that binds them. But following his father's recent death, Idris, the family's new patriarch, has decided to sell. The decision brings the family to Beirut, where everyone unites against Idris in a fight to save the house.

They all have secrets that distance has helped smother. But in a city smoldering with the legacy of war, an ongoing flow of refugees, religious tension, and political protest, those secrets ignite, imperiling the fragile ties that hold this family together. The Arsonists’ City is a rich family story, a personal look at the legacy of war in the Middle East, and an indelible rendering of how we hold on to the people and places we call home.

Hala Alyan is the author of the novel Salt Houses, winner of the Dayton Literary Peace Prize and the Arab American Book Award and a finalist for the Chautauqua Prize, as well as four award-winning collections of poetry, most recently The Twenty-Ninth Year. Her work has been published by The New Yorker, the Academy of American Poets, LitHub, the New York Times Book Review, and Guernica. She lives in Brooklyn with her husband, where she works as a clinical psychologist.

Moderator Jess Rizkallah is a Lebanese-American writer and illustrator. Her full-length collection the magic my body becomes was a finalist for The Believer Poetry Award and won the 2017 Etel Adnan Poetry Prize as awarded by the Radius of Arab-American Writers and University of Arkansas Press. Find her at jessrizkallah.com.