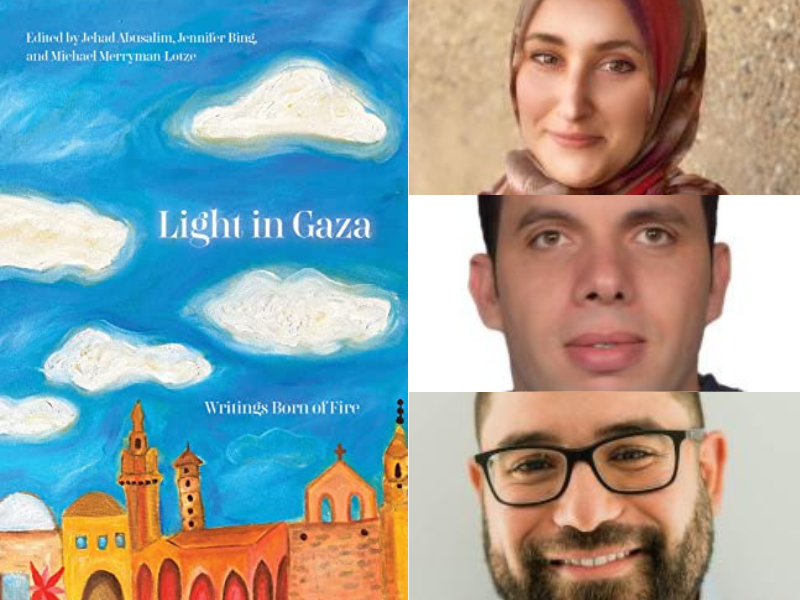 Join the Transnational Literature Series at Brookline Booksmith for an in-person event with Asmaa Abu Mezied, Yousef Aljamal, and Jehad Abusalim to discuss and celebrate the release of Light in Gaza: Writings Born of Fire, a new anthology published by AFSC and Haymarket Books. We are co-sponsors of this event with the American Friends Service Committee, The Water Justice Alliance Project, Jewish Voice for Peace Boston, and Massachusetts Peace Action

Gaza, home to two million people, continues to face suffocating conditions imposed by Israel. This distinctive anthology imagines what the future of Gaza could be, while reaffirming the critical role of Gaza in Palestinian identity, history, and struggle for liberation.

Light in Gaza is a seminal, moving, and wide-ranging anthology of Palestinian writers and artists. It constitutes a collective effort to organize and center Palestinian voices in the ongoing struggle. As political discourse shifts toward futurism as a means of reimagining a better way of living, beyond the violence and limitations of colonialism, Light in Gaza is an urgent and powerful intervention into an important political moment.

Asmaa Abu Mezied is an economic development and social inclusion specialist working to address issues of gender, development, and climate change in the agriculture sector. Her research interests focus on the care economy, women’s collectives organizing in economic sectors, the private sector’s social accountability, and the intersection of Palestinian political, agricultural, and environmental identities.

Yousef Aljamal is an author, journalist, and translator. He has published widely and is the co-translator of Prisoners Diaries: Palestinian Voices from the Israeli Gulag, the translator of Dreaming of Freedom: Palestinian Child Prisoners Speak, and a translator/coauthor of A Shared Struggle: Stories of Palestinian and Irish Hunger Strikers. In 2014 Yousef toured the United States on a book tour for Gaza Writes Back: Short Stories from Young Writers in Gaza, Palestine. He is a PhD candidate at the Middle East Institute at Sakarya University, Turkey.

Jehad Abusalim is a scholar, writer, public speaker and coordinator for education and policy with AFSC's Palestine Activism Program.