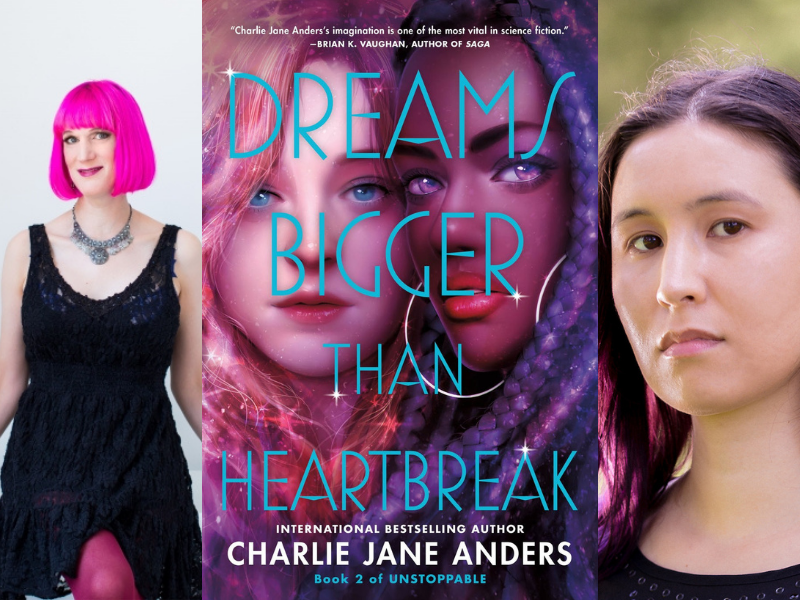 In person at Brookline Booksmith! Join author Charlie Jane Anders for a discussion of Dreams Bigger Than Heartbreak, second book in the Unstoppable series. She is joined by author Rebecca Kim Wells!

From the international bestselling author of All the Birds in the Sky, Charlie Jane Anders, comes Dreams Bigger Than Heartbreak, the sequel to Victories Greater Than Death in the thrilling adventure Unstoppable series.

They'll do anything to be the people they were meant to be — even journey into the heart of evil. Rachael Townsend is the first artist ever to leave Earth and journey out into the galaxy — but after an encounter with an alien artifact, she can't make art at all. Elza Monteiro is determined to be the first human to venture inside the Palace of Scented Tears and compete for the chance to become a princess — except that inside the palace, she finds the last person she ever wanted to see again. Tina Mains is studying at the Royal Space Academy with her friends, but she's not the badass space hero everyone was expecting.

Soon Rachael is journeying into a dark void, Elza is on a deadly spy mission, and Tina is facing an impossible choice that could change all her friends' lives forever.

Charlie Jane Anders is the author of Victories Greater Than Death, the first book in the Unstoppable trilogy, along with the short story collection Even Greater Mistakes. She's also the author of Never Say You Can't Survive, a book about how to use creative writing to get through hard times. Her other books include The City in the Middle of the Night and All the Birds in the Sky. She's won the Hugo, Nebula, Sturgeon, Lambda Literary, Crawford and Locus Awards. Her fiction and journalism have appeared in the New York Times, the Washington Post, Slate, McSweeney's, Mother Jones, the Boston Review, Tor.com, Tin House, Teen Vogue, Conjunctions, Wired Magazine, and other places. Her TED Talk, "Go Ahead, Dream About the Future" got 700,000 views in its first week. With Annalee Newitz, she co-hosts the podcast Our Opinions Are Correct.

Moderator Rebecca Kim Wells writes books full of magic and fury (and often dragons). Her debut novel Shatter the Sky was a New England Book Award finalist, a Bisexual Book Award winner, an ALA Rainbow Book List title, an Indies Introduce title, and a Kids’ Indie Next Pick. She is also the author of Storm the Earth and Briar Girls, published by Simon & Schuster Books for Young Readers. If she were a hobbit, she would undoubtedly be a Took.