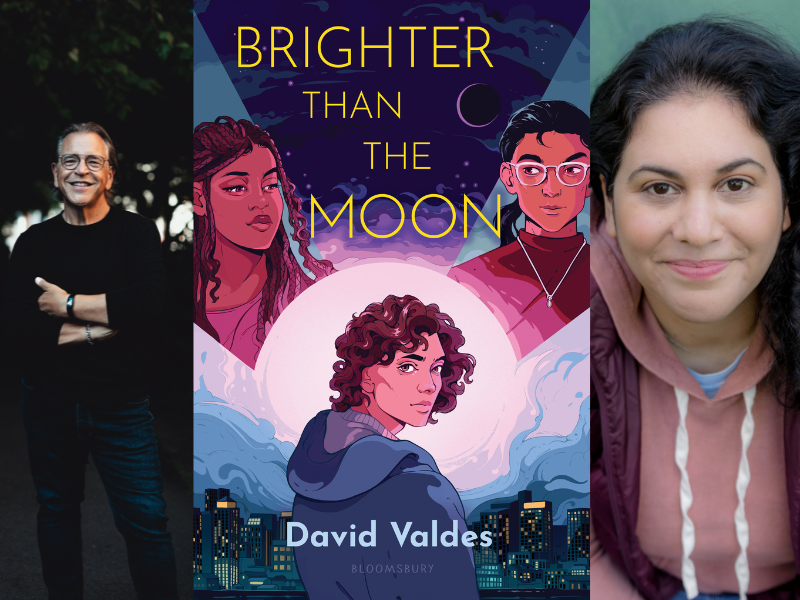 In person at Brookline Booksmith! Celebrate the release of Brighter Than the Moon with author David Valdes, in conversation with Sara Farizan.

Brighter Than the Moon

From the author of Spin Me Right Round, a fresh, modern story about learning how to love--starting with yourself--as three teens who know each other online meet up and find themselves questioning everything.

Shy foster kid Jonas and self-assured vlogger Shani met online, and so far, that's where their relationship has stayed, sharing memes and baring their souls from behind their screens. Shani is eager to finally meet up, but Jonas isn't so sure--he's not confident Shani will like the real him...if he's even sure who that is.

Jonas knows he's trapped himself in a lie with Shani--and wants to dig himself out. But Shani, who's been burned before, may not give him a chance: she talks her best friend Ash into playing spy and finding out the truth. When Ash falls for Jonas, too, he keeps that news from Shani, and soon they're all keeping secrets. Will it matter that their hearts are in the right place? Coming clean will require them to figure out who they really are, which is no easy task when all the pieces of your identity go beyond easy boxes and labels.

Lauded writer David Valdes offers a heartfelt, clever, and thought-provoking story about how we figure out who we want to be--online and IRL--for fans of David Levithan and Adam Silvera.

David Valdes is the author of the young adult novel Spin Me Right Round (Indie Next pick, Junior Library Guild selection, New York Public Library Best Book for Teens), as well as three nonfiction books, including Today Show “Top 10 Holiday Books” pick A Little Fruitcake. His plays have been produced coast to coast and abroad. As a columnist, he has written for the New York Times, Boston Globe, and HuffPo. He lives outside Boston with his teenage daughter.

Moderator Sara Farizan (she/her) is the award-winning and critically acclaimed author of books and stories for young people. Her young adult novels with Algonquin Young Readers are Here to Stay, Tell Me Again How a Crush Should Feel, and the Lambda Literary award winning If You Could Be Mine, which was named one of TIME magazine’s 100 Best YA Books of All Time. Her latest novel, Dead Flip, is a horror comedy set in the 90s about a childhood friend who comes back from disappearing in the 80s and is still twelve while his estranged best friends are seniors in high school. Booklist's starred review of Dead Flip described it as "A well-crafted homage to narratives like It and Stranger Things...A great choice for horror stalwart fans and newcomers to the genre." She also had a dream come true in writing a middle grade graphic novel for DC comics, My Buddy Killer Croc, illustrated by Nicoletta Baldari, featuring many of Farizan's favorite characters from Gotham City.