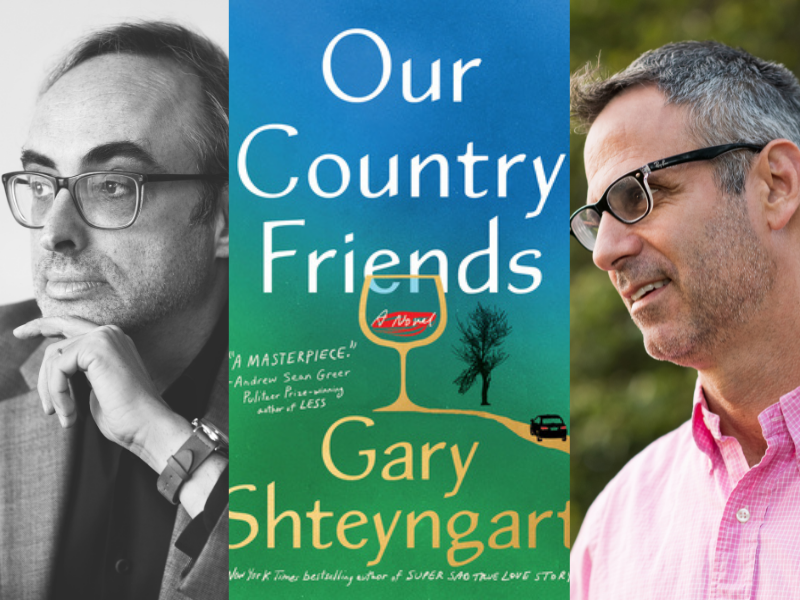 Live and in person at Brookline Booksmith: celebrate the release of Our Country Friends with author Gary Shteyngart, in conversation with Steve Almond.

Books will be available for purchase at the event, but you can ensure that you get a copy by preordering on this page. You can pick your book up after 2:30PM on the day of the event.

“There cannot be a more relevant novel for our moment, certainly not one with such beauty of description, depth of feeling, and, as always, humor. Shteyngart has written an American comic Decameron, or, to be plain: a masterpiece.”

Eight friends, one country house, four romances, and six months in isolation—a novel about love, friendship, family, and betrayal, a book that reads like a great Russian novel, or Chekhov on the Hudson, by a novelist The New York Times calls “one of his generation’s most original writers."

It’s March 2020 and a calamity is unfolding. A group of friends and friends-of-friends gathers in a country house to wait out the pandemic. Over the next six months, new friendships and romances will take hold, while old betrayals will emerge, forcing each character to reevaluate whom they love and what matters most. The unlikely cast of characters includes a Russian-born novelist; his Russian-born psychiatrist wife; their precocious child obsessed with K-pop; a struggling Indian American writer; a wildly successful Korean American app developer; a global dandy with three passports; a Southern flamethrower of an essayist; and a movie star, the Actor, whose arrival upsets the equilibrium of this chosen family. Both elegiac and very, very funny, Our Country Friends is the most ambitious book yet by the author of the beloved bestseller Super Sad True Love Story.

Gary Shteyngart was born in Leningrad in 1972 and came to the United States seven years later. His debut novel, The Russian Debutante’s Handbook, won the Stephen Crane Award for First Fiction and the National Jewish Book Award for Fiction. His second novel, Absurdistan, was named one of the 10 Best Books of the Year by The New York Times Book Review. His novel Super Sad True Love Story won the Bollinger Everyman Wodehouse Prize and became one of the most iconic novels of the decade. His memoir, Little Failure, was a National Book Critics Circle Award finalist and a New York Times bestseller. His most recent novel is Lake Success. His books regularly appear on best-of lists around the world and have been published in thirty countries.

Moderator Steve Almond is the author of a dozen books including the New York Times Bestsellers Candyfreak and Against Football. His new book, the novel All the Secrets of the World, will be out this Spring. He lives outside Boston with his wife, his children, and his anxiety.