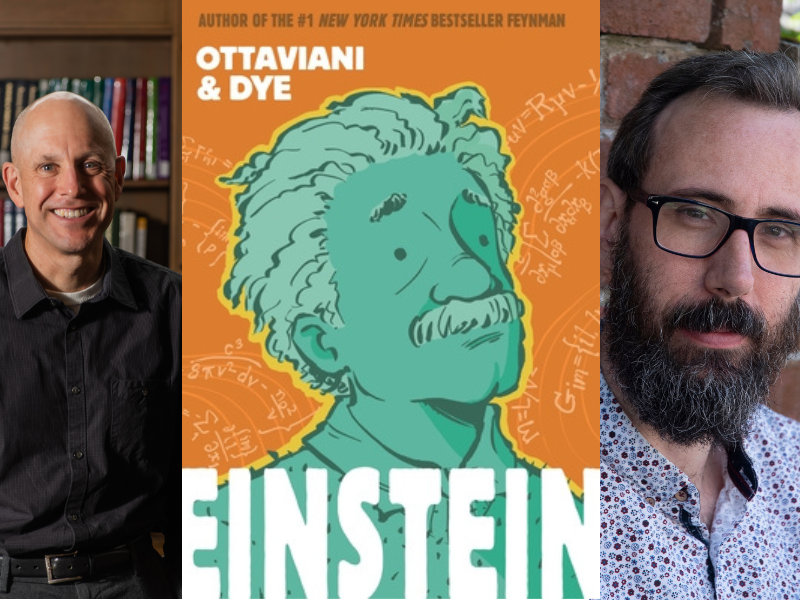 In person at Brookline Booksmith! Celebrate the release of Einstein, a new graphic biography of the world's best-known scientist, with writer Jim Ottaviani and artist Jerel Dye.

A world-changing equation and a wild head of hair are all most of us know about one of history’s greatest minds, despite his being a household name in his lifetime and an icon in ours. But while the broad outlines of what Einstein did are well known, who he was remained hidden from view to most...even his closest friends.

This is the story of a scientist who made many mistakes, and even when he wanted to be proven wrong, was often right in the end. It's a story of a humanist who struggled to connect with people. And it's a story of a reluctant revolutionary who paid a high price for living with a single dream.

In Einstein, Jim Ottaviani and Jerel Dye take us behind the veneer of celebrity, painting a complex and intimate portrait of the scientist whose name has become another word for genius.

Jim Ottaviani has written fifteen (and counting) graphic novels about scientists. His books include Naturalist (with E.O. Wilson), Astronauts: Women on the Final Frontier, Hawking, The Imitation Game, Primates, and Feynman. His books are New York Times bestsellers, have been translated into a dozen languages, and have received praise from publications ranging from Nature and Physics World to Entertainment Weekly and Variety. Jim lives in Michigan and comes to comics via careers in nuclear engineering and librarianship.

Jerel Dye has been creating art and comics in the Boston area since 2005. He has produced self-published mini comics and comics stories for anthologies like Inbound, Minimum Paige, Hellbound, and the award winning Little Nemo/Winsor McCay tribute Dream Another Dream. In 2012, he received the MICE comics grant for his mini-comic From the Clouds. His first graphic novel, Pigs Might Fly, was released in 2017. His art stems from an interest in science and technology, though it frequently contains a healthy dose of wonder. Jerel has been teaching courses in drawing, cartooning and comics to adults in Massachusetts since 2010.