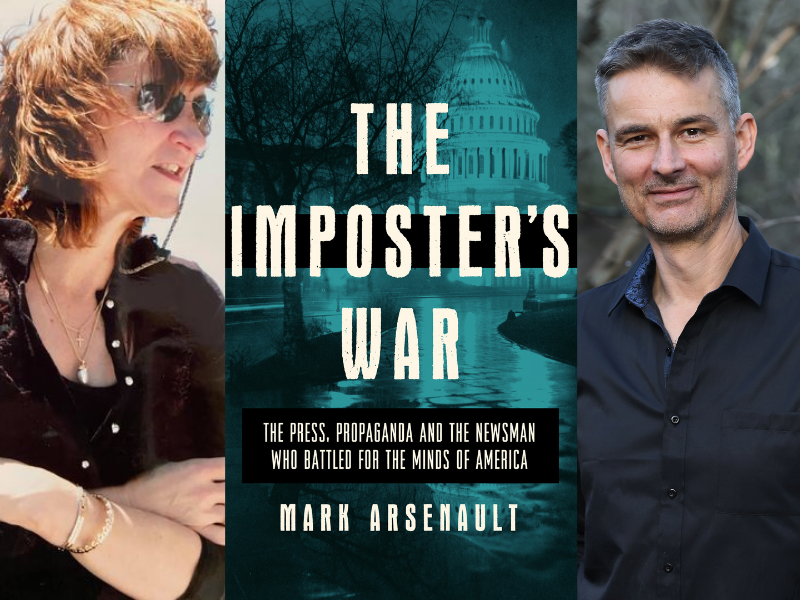 In person at Brookline Booksmith! Celebrate the release of The Imposter's War with author Mark Arsenault, in conversation with Jan Brogan.

Barring technical difficulty, this event will be streamed live to our YouTube channel.

The Imposter's War: The Press, Propaganda, and the Newsman who Battled for the Minds of America

The shocking history of the espionage and infiltration of American media during WWI and the man who exposed it. A man who was not who he claimed to be...

Russia was not the first foreign power to subvert American popular opinion from inside. In the lead-up to America’s entry into the First World War, Germany spent the modern equivalent of one billion dollars to infiltrate American media, industry, and government to undermine the supply chain of the Allied forces. If not for the ceaseless activity of John Revelstoke Rathom, editor of the scrappy Providence Journal, America may have remained committed to its position of neutrality. But Rathom emerged to galvanize American will, contributing to the conditions necessary for President Wilson to request a Declaration of War from Congress—all the while exposing sensational spy plots and getting German diplomats expelled from the U.S.

And yet John Rathom was not even his real name. His swashbuckling biography was outrageous fiction. And his many acts of journalistic heroism, which he recounted to rapt audiences on nationwide speaking tours, never happened. Who then was this great, beloved, and ultimately tragic imposter?

Mark Arsenault has covered national politics, gambling, and worked on Spotlight Team investigations as a staff reporter for the Boston Globe, which won a Pulitzer Prize for its coverage of the Boston Marathon bombing. This is his first nonfiction book.

Moderator Jan Brogan, a journalist for more than thirty years, is the author of The Combat Zone: Murder, Race and Boston’s Struggle for Justice, the story of the 1976 murder of a Harvard football player in Boston’s notorious red light district, the two trials that followed, with nearly opposite results, and the lasting impact on criminal justice. The book is an Agatha award nominee for Best Non-fiction published in 2021. She is the award-winning author of four mysteries, Final Copy, A Confidential Source, Yesterday’s Fatal and Teaser. Transactional Pictures purchased the rights to A Confidential Source, which is under development for a television series. She worked as a correspondent for the Boston Globe and a staff writer for the Providence Journal, where she won the Gerald Loeb award.