Live with Brookline Booksmith! Siddhartha Mukherjee: The Song of the Cell

Live with Brookline Booksmith! Siddhartha Mukherjee: The Song of the Cell 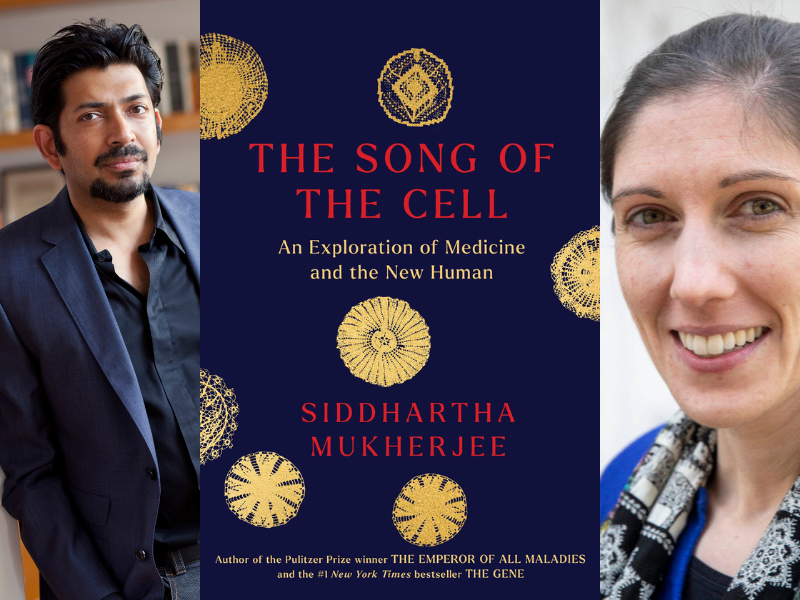 Live and in person with Brookline Booksmith, at Coolidge Corner Theatre! Celebrate the release of The Song of the Cell with Siddhartha Mukherjee, the author of The Emperor of All Maladies and The Gene.

He is joined in conversation by WBUR Senior Health and Science Reporter Gabrielle Emanuel.

This event is ticketed. Tickets include a general admission seat at the event AND a copy of The Song of the Cell.

The Song of the Cell: An Exploration of Medicine and the New Human

From the author of The Emperor of All Maladies, winner of the Pulitzer Prize, and The Gene, a #1 New York Times bestseller, comes his most spectacular book yet, an exploration of medicine and our radical new ability to manipulate cells. Rich with Mukherjee’s revelatory and exhilarating stories of scientists, doctors, and the patients whose lives may be saved by their work, The Song of the Cell is the third book in this extraordinary writer’s exploration of what it means to be human.

Mukherjee begins this magnificent story in the late 1600s, when a distinguished English polymath, Robert Hooke, and an eccentric Dutch cloth-merchant, Antonie van Leeuwenhoek looked down their handmade microscopes. What they saw introduced a radical concept that swept through biology and medicine, touching virtually every aspect of the two sciences, and altering both forever. It was the fact that complex living organisms are assemblages of tiny, self-contained, self-regulating units. Our organs, our physiology, our selves—hearts, blood, brains—are built from these compartments. Hooke christened them “cells”.

The discovery of cells—and the reframing of the human body as a cellular ecosystem—announced the birth of a new kind of medicine based on the therapeutic manipulations of cells. A hip fracture, a cardiac arrest, Alzheimer’s dementia, AIDS, pneumonia, lung cancer, kidney failure, arthritis, COVID pneumonia—all could be reconceived as the results of cells, or systems of cells, functioning abnormally. And all could be perceived as loci of cellular therapies.

In The Song of the Cell, Mukherjee tells the story of how scientists discovered cells, began to understand them, and are now using that knowledge to create new humans. He seduces you with writing so vivid, lucid, and suspenseful that complex science becomes thrilling. Told in six parts, laced with Mukherjee’s own experience as a researcher, a doctor, and a prolific reader, The Song of the Cell is both panoramic and intimate—a masterpiece.

Siddhartha Mukherjee is the author of The Gene: An Intimate History, a #1 New York Times bestseller; The Emperor of All Maladies: A Biography of Cancer, winner of the 2011 Pulitzer Prize in general nonfiction; and The Laws of Medicine. He is the editor of Best Science Writing 2013. Mukherjee is an associate professor of medicine at Columbia University and a cancer physician and researcher. A Rhodes scholar, he graduated from Stanford University, University of Oxford, and Harvard Medical School. He has published articles in many journals, including Nature, The New England Journal of Medicine, Cell, The New York Times Magazine, and The New Yorker. He lives in New York with his wife and daughters. Visit his website at: SiddharthaMukherjee.com.

Moderator Gabrielle Emanuel joined WBUR as a senior health and science reporter in 2021. Gabrielle’s stories regularly appear on NPR’s Morning Edition and All Things Consider and she has reported episodes for Planet Money and Code Switch. Her work has appeared in The New York Times and The Atlantic. She has received numerous awards, including national and regional Edward R. Murrow Awards, a Sigma Delta Chi Award and a Clarion Award. Gabrielle received her bachelor's degree from Dartmouth College and her doctorate from Oxford University as a Rhodes Scholar.