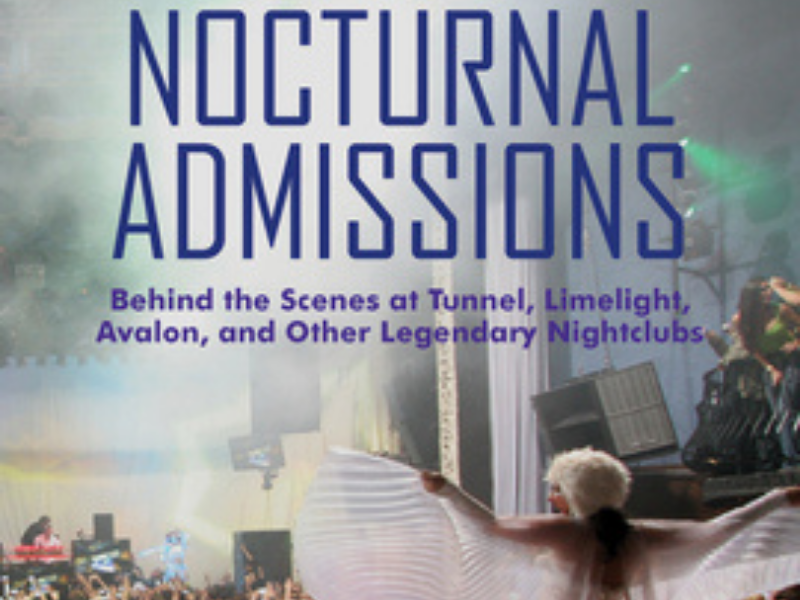 In person at Brookline Booksmith! Celebrate the release of Nocturnal Admissions with author Steve Adelman, in conversation with Bethany Van Delft.

Books will be available for purchase at the event, but you can ensure that you get a copy by preordering on the registration page. You can pick your book up after 5:30PM on the day of the event.

Nocturnal Admissions: Behind the Scenes at Tunnel, Limelight, Avalon, and Other Legendary Nightclubs

“With his 30 years of experience running the world's biggest nightclubs, Steve Adelman takes you behind the velvet rope to a world of celebrity, power, and most of all, fun. With his dishy yarns and observational humor, he transports you so you're right there basking under the lights of a disco ball with him.” – Kevin Fallon, Daily Beast

“Nocturnal Admissions chronicles a great time to be alive. In the late ’90s and early 2000s American nightlife got a second wind and in the thick of it was Steve Adelman with clubs in New York, Boston, and Los Angeles. I was so glad to have been a part of this period as the energy was incredible. Playing at Avalon in Boston and L.A. was always one of the highlights on a stateside tour, with lines around the block every time. These clubs set the standard for the events that take place now.”—John Digweed, DJ and record producer

“Steve Adelman knows nightlife. His customers might not remember much, but Adelman does. In Nocturnal Admissions, he takes us on a youthful adventure into the depths of dancing —without ever losing his sense of wonder.” - Richard Johnson, New York Daily News

Steve Adelman's humorous and engaging memoir reflects on his years as the director and owner of some of the world's most popular nightclubs, including the Roxy, Limelight, Tunnel, and Palladium in the heyday of clubs in New York City during the 1980s and 1990s, followed by Avalon (Boston, Hollywood, NYC, and Singapore locations), and the New Daisy Theatre in Memphis. Nocturnal Admissions is a timely, unconventional look at one of pop culture's most outwardly glamorous, yet misunderstood industries, bringing the reader backstage into the world of nightlife at its highest level.

Wearing the multiple hats of ringmaster, entrepreneur, guidance counselor, multimillion-dollar dealmaker, and music soothsayer, Adelman chronicles an improbable journey from small town to big city, filled with a cast of characters he could never have imagined: People named Hedda Lettuce, Jenetalia, Maxi Min, and Jiggy, who collide with and around the likes of Jack Nicholson, Bruce Willis, Sir Richard Branson, Leonardo DiCaprio, RuPaul, Rudy Giuliani, and Snoop Dogg, among many, many others.

Nocturnal Admissions is a hilarious, adrenaline-filled ride through the peak decades of the world's most famous nightclubs and nightlife scenes.

Since 1990, over eighteen million entertainment seekers have walked through the doors of Steve Adelman’s venues.

In the early 90s, he moved to New York City to open the Roxy nightclub, serving as its director. The groundbreaking project soon gained a reputation as the city’s top mega-club, putting him on the map. Only two years later Steve was tabbed as director of the iconic Limelight and within three years had expanded his role to include NYC’s four largest nightclubs, including the legendary Tunnel and Palladium.

In 1997, Adelman returned to Boston to relaunch Avalon on Lansdowne Street, which quickly became a national success. Over the next four years, he led a team to develop six venues on the famed street, turning it into the ultimate one-stop entertainment destination.

In 2002, Adelman purchased the Palace Theatre in Hollywood and Limelight in New York City, the same venue he directed ten years earlier. After one year in construction and renovations, he expanded Avalon on both coasts with partner John Lyons, along with the ultra-exclusive Spider Club. This “club within a club” became the ultimate celebrity haunt and one of the country’s most sought-after Nightlife experiences.

Always striving to be one step ahead and break new ground, he expanded his focus to Singapore, opening Avalon as part of the Marina Bay Sands Resort and Casino, becoming the first American-entertainment brand of its kind in Asia. Returning to the States, Steve set his sights on Beale Street in Memphis, restoring the historic New Daisy Theatre.

Steve currently calls Memphis, TN and Union Pier, MI home, where he lives with his wife Michele and their dog Milton, and still remains a big Celtics fan.

About the moderator: Her “hip & grounded, laid back delivery” has earned Bethany Van Delft the honor of performing at cool ass festivals like J4L, All Jane and SF Sketchfest. She was named “Best Comic” by Boston Magazine in 2020 & 2019, her debut comedy album “Im Not a Llama” dropped Dec 2019 to good reviews and an impressive number of minutes at #2 on the iTunes charts. She regularly hosts The Moth live events and has a story included in The Moth book “All These Wonders”. Bethany is a fierce parent advocate and a frequent keynote speaker in the special education and inclusion spaces, highlighting the importance of storytelling in family engagement and advocacy. She co-hosts the PBS Nova series “PARENTALOGIC”, hosts the kids news podcast “The Ten News” on iHeart Radio and produces a weekly comedy/chat show, ARTISANAL COMEDY. When she is not doing any of these things you can find her incessantly decluttering.