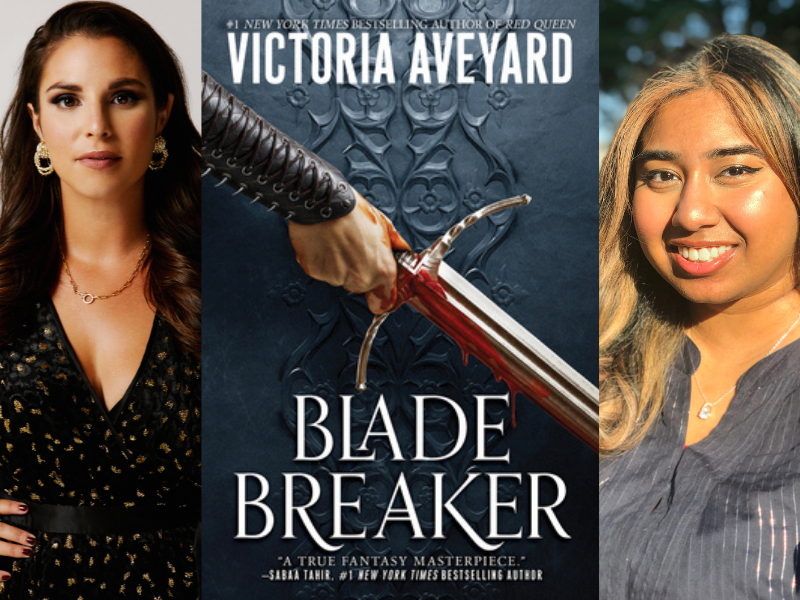 Live and in person with Brookline Booksmith, at Coolidge Corner Theatre! Celebrate the release of Blade Breaker with author Victoria Aveyard, in conversation with Tashie Bhuiyan.

***REGARDLESS OF LOCAL GUIDELINES, MASKING AND COVID VACCINATION ARE REQUIRED FOR THIS EVENT***

This event is ticketed. Tickets include a general admission seat at the event AND either a copy of Blade Breaker OR Realm Breaker.

The book that comes with your ticket will be presigned by Victoria Aveyard.

We are also offering a limited number of PERSONALIZED books. See ticket options for details!

There will not be a meet and greet or live signing at this event.

In the sequel to Victoria Aveyard’s instant #1 New York Times bestselling Realm Breaker, a divided world must rally, an unstoppable enemy must be defeated, and the fate of the world rests on a blade’s edge.

Andry, a former squire, continues to fight for hope amid blood and chaos.

Dom, a grieving immortal, strives to fulfill a broken oath.

Sorasa, an outcast assassin, faces her past when it returns with sharpened teeth.

And Corayne, a pirate’s daughter with an ancient magic in her blood, steps closer to becoming the hero she’s destined to be.

Together they must assemble an army to face Queen Erida and Taristan’s wicked forces. But something deadly waits in the shadows, something that might consume the world before there’s any hope for victory.

Victoria Aveyard was born and raised in East Longmeadow, MA, a small town known only for the most complicated traffic rotary in the continental United States. She now lives in Los Angeles, where traffic is definitely worse. As an author and screenwriter, she uses her career as an excuse to read too many books and watch too many movies. She is the author of the #1 New York Times bestselling Red Queen and Realm Breaker series, and you can visit her online at www.victoriaaveyard.com.

Moderator Tashie Bhuiyan is a Bangladeshi American writer based in New York City and is the author of Counting Down with You. She recently graduated from St. John's University with a bachelor's degree in Public Relations, and hopes to change the world, one book at a time. She loves writing stories about girls with wild hearts, boys who wear rings, and gaining agency through growth. When she's not doing that, she can be found in a Chipotle or bookstore, insisting 2010 is the best year in cinematic history. (Read: Tangled and Inception.) Visit her online at @tashiebhuiyan or tashiebhuiyan.com.