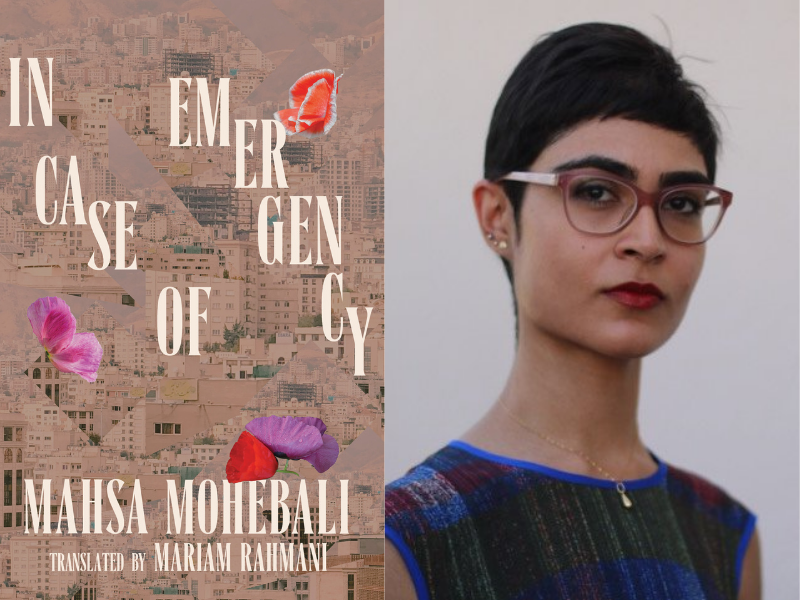 Join the Transnational Literature Series at Brookline Booksmith for a virtual event with translator Mariam Rahmani to discuss and celebrate the release of In Case of Emergency by Mahsa Mohebali. She will be in conversation with poet Kaveh Akbar.

What do you do when the world is falling apart and you’re in withdrawal? Disillusioned, wealthy, and addicted to opium, Shadi wakes up one day to apocalyptic earthquakes and a dangerously low stash. Outside, Tehran is crumbling: yuppies flee in bumper-to-bumper traffic as skaters and pretty boys rise up to claim the city as theirs. Cross-dressed to evade hijab laws, Shadi flits between her dysfunctional family and depressed friends—all in search of her next fix.

Mahsa Mohebali’s groundbreaking novel about Iranian counterculture is a satirical portrait of the disaster that is contemporary life. Weaving together gritty vernacular and cinematic prose, In Case of Emergency takes a darkly humorous, scathing look at the authoritarian state, global capitalism, and the gender binary.

Mariam Rahmani is a writer and translator. Her fiction has appeared in Gulf Coast; her translations in n+1, Columbia Journal, and After Cinema: Fictions from a Collective Memory; and her nonfiction in Granta, BOMB magazine, the Los Angeles Review of Books, and the Rumpus. She holds a PhD in Comparative Literature and is the recipient of a PEN/Heim Translation Fund Grant as well as a US Fulbright Research Award. She is currently working on her debut novel. Photo credit: Marwa Al Haddad.

Kaveh Akbar's poems appear in The New Yorker, Paris Review, The New York Times, Best American Poetry, and elsewhere. He is the author of two books of poetry—Pilgrim Bell (Graywolf, 2021) and Calling a Wolf a Wolf (Alice James, 2017)—and the editor of The Penguin Book of Spiritual Verse. Born in Tehran, Iran, Kaveh teaches at Purdue University and in the low-residency MFA programs at Randolph and Warren Wilson College. He serves as Poetry Editor for The Nation.