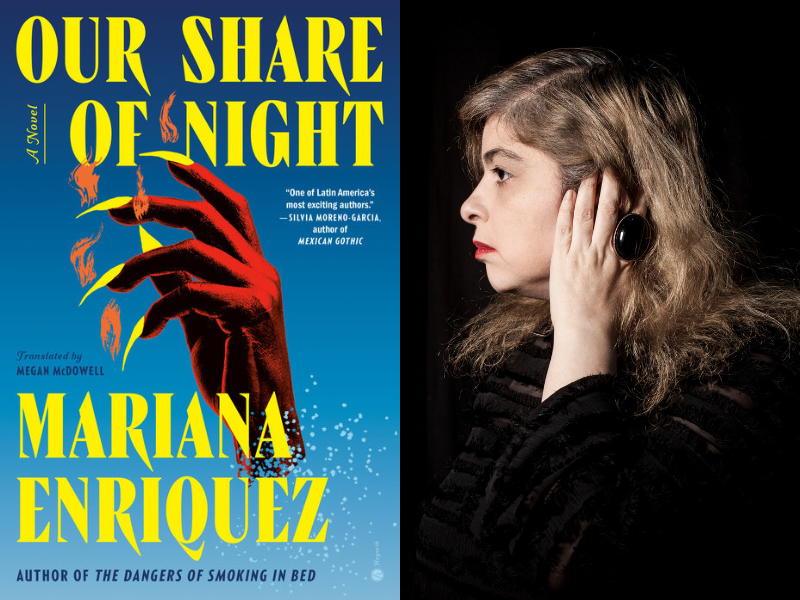 Join the Transnational Literature Series at Brookline Booksmith, Community Bookstore, and Third Place Books for a virtual event with author Mariana Enriquez and translator Megan McDowell to discuss and celebrate the release of their new book Our Share of Night.

A young father and son set out on a road trip, devastated by the death of the wife and mother they both loved. United in grief, the pair travel to her ancestral home, where they must confront the terrifying legacy she has bequeathed: a family called the Order that commits unspeakable acts in search of immortality.

For Gaspar, the son, this maniacal cult is his destiny. As the Order tries to pull him into their evil, he and his father take flight, attempting to outrun a powerful clan that will do anything to ensure its own survival. But how far will Gaspar’s father go to protect his child? And can anyone escape their fate?

Moving back and forth in time, from London in the swinging 1960s to the brutal years of Argentina’s military dictatorship and its turbulent aftermath, Our Share of Night is a novel like no other: a family story, a ghost story, a story of the occult and the supernatural, a book about the complexities of love and longing with queer subplots and themes. This is the masterwork of one of Latin America’s most original novelists, “a mesmerizing writer,” says Dave Eggers, “who demands to be read.”

Mariana Enriquez is a writer and editor based in Buenos Aires. She has published two story collections in English, Things We Lost in the Fire and The Dangers of Smoking in Bed, which was a finalist for the International Booker Prize, the Kirkus Prize, the Ray Bradbury Prize for Science Fiction, Fantasy & Speculative Fiction, and the Los Angeles Times Book Prize in fiction. Photo credit: Florencia Cosin.

Megan McDowell’s translations have won the National Book Award, the English PEN Award, the Premio Valle-Inclán, the Shirley Jackson Award, and the O. Henry Prize, and have been finalists for the Kirkus Prize and the International Booker Prize (four times). In 2020 she won an award in literature from the American Academy of Arts and Letters. McDowell lives in Santiago, Chile. Photo credit: Camila Valdés.