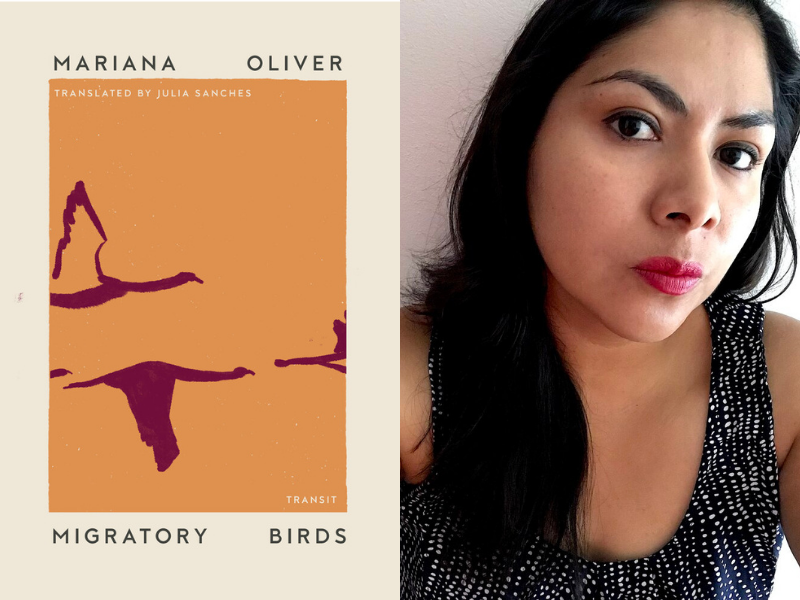 Join the Transnational Literature Series at Brookline Booksmith for a virtual event with author Mariana Oliver and translator Julia Sanches to discuss and celebrate the release of Migratory Birds.

In her prize-winning debut, Mexican essayist Mariana Oliver trains her gaze on migration in its many forms, moving between real cities and other more inaccessible territories: language, memory, pain, desire, and the body. With an abiding curiosity and poetic ease, Oliver leads us through the underground city of Cappadocia, explores the vicissitudes of a Berlin marked by historical fracture, recalls a shocking childhood exodus, and recreates the intimacy of the spaces we inhabit. Blending criticism, reportage, and a travel writing all her own, Oliver presents a brilliant collection of essays that asks us what it means to leave the familiar behind and make the unfamiliar our own. Part of the Undelivered Lectures series from Transit Books.

Mariana Oliver was born in Mexico City in 1986. She received a master’s degree in comparative literature from the National Autonomous University of México (UNAM) and is currently working towards a doctoral degree in modern literature at the Iberoamerican University in Mexico City. Oliver was granted a fellowship for essay writing at the Foundation for Mexican Literature and was awarded the José Vasconcelos National Young Essay Award for Migratory Birds.

Julia Sanches is a translator of Portuguese, Spanish, and Catalan. She has translated works by Susana Moreira Marques, Claudia Hernández, Daniel Galera, and Eva Baltasar, among others. Her shorter translations have appeared in various magazines and periodicals, including Words Without Borders, Granta, Tin House, and Guernica. A founding member of Cedilla & Co., Julia sits on the Council of the Authors Guild.

Moderator Jazmina Barrera was born in Mexico City in 1988. A former fellow at the Foundation for Mexican Letters, she has a Master's Degree in Creative Writing in Spanish from New York University, which she completed with the support of a Fulbright grant. Her book of essays Cuerpo Extraño was awarded the Latin American Voices prize from Literal Publishing in 2013. She has published her work in various print and digital media outlets, such as Nexos, Este País, Dossier, Vice, El Malpensante, Letras Libres, and Tierra Adentro. A grantee of the Young Creators program at FONCA, she is editor and cofounder of Ediciones Antílope. She is the author most recently of On Lighthouses, translated by Christina MacSweeney.