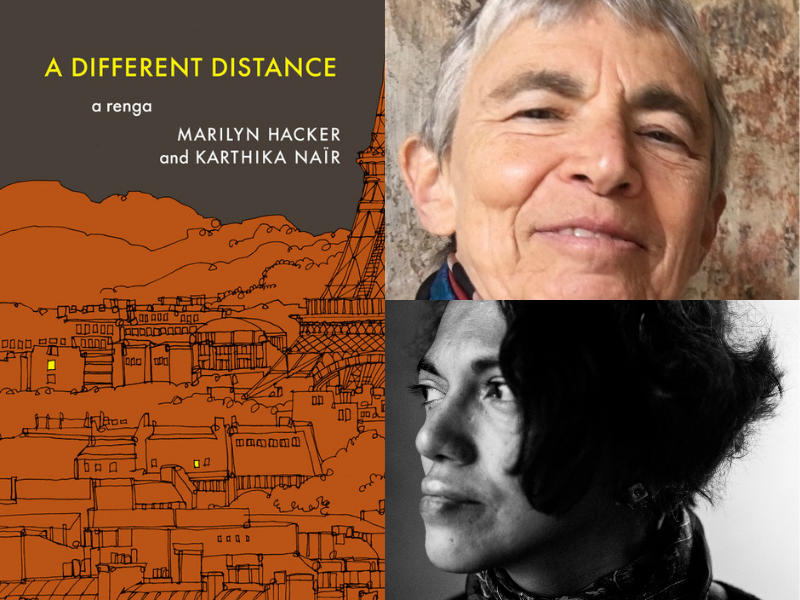 Join the Transnational Literature Series at Brookline Booksmith for a virtual event with Marilyn Hacker and Karthika Naïr to discuss and celebrate the release of A Different Distance. They will be in conversation with poet Christopher Merrill.

In March 2020, France declared a full lockdown to prevent the spread of the coronavirus. Shortly thereafter, poets and friends Marilyn Hacker and Karthika Naïr—living mere miles from each other but separated by circumstance, and spurred by this extraordinary time—began a correspondence in verse.

Renga, an ancient Japanese form of collaborative poetry, is comprised of alternating tanka beginning with the themes of tōki and tōza: this season, this session. Here, from the "plague spring," through a year in which seasons are marked by the waxing and waning of the virus, Hacker and Naïr's renga charts the "differents and sames" of a now-shared experience. Their poems witness a time of suspension in which some things, somehow, press on relentlessly, in which solidarity persists—even thrives—in the face of a strange new kind of isolation. Between "ten thousand, yes, minutes of Bones," there's cancer and chemotherapy and the aches of an aging body. There is grief for the loss of friends nearby and concern for loved ones in the United States, Lebanon, and India. And there is a deep sense of shared humanity, where we all are "mere atoms of water, / each captained by protons of hydrogen, hurtling earthward."

At turns poignant and playful, the seasons and sessions of A Different Distance display the compassionate, collective wisdom of two women witnessing a singular moment in history.

Marilyn Hacker is the author of fourteen books of poems, including Blazons and A Stranger’s Mirror (longlisted for the 2015 National Book Award), a collaborative book, Diaspo/ Renga, written with Deema K. Shehabi, and an essay collection, Unauthorized Voices. Her eighteen translations of French and Francophone poets include Samira Negrouche’s The Olive Trees’ Jazz, Jean-Paul de Dadelsen’s That Light, All at Once, and Claire Malroux’s Daybreak. She is a former editor of the Kenyon Review, and of the French literary journal Siècle 21. She received the 2009 PEN Award for Poetry in Translation for Marie Etienne's King of a Hundred Horsemen, the 2010 PEN Voelcker Award for her own work, and the international Argana Prize for Poetry from the Beit as-Sh’ir/ House of Poetry in Morocco in 2011. She lives in Paris.

Karthika Naïr is a poet, fabulist and librettist whose books include The Honey Hunter, illustrated by Joëlle Jolivet. Until the Lions: Echoes from the Mahabharata, her reimagining of the foundational South Asian epic in multiple voices, won the 2015 Tate Literature Live Award for Book of the Year (Fiction), was shortlisted for the Atta Galatta Prize and highly commended in the 2016 Forward Prizes. Naïr has scripted and coscripted performances for choreographers Akram Khan (DESH, Chotto Desh, and Until the Lions, adapted from her own book), Sidi Larbi Cherkaoui & Damien Jalet (Babel 7.16), and Carlos Pons Guerra (Mariposa). She is the co-founder of Cherkaoui’s Antwerp-based dance company, Eastman, and executive producer of several of his and Damien Jalet's works.

Moderator Christopher Merrill has published seven collections of poetry; many edited volumes and translations; and six books of nonfiction, among them, Only the Nails Remain: Scenes from the Balkan Wars, Things of the Hidden God: Journey to the Holy Mountain, The Tree of the Doves: Ceremony, Expedition, War, and Self-Portrait with Dogwood. His writings have been translated into nearly forty languages; his journalism appears widely; his honors include a Chevalier des Arts et des Lettres from the French government, numerous translation awards, and fellowships from the John Simon Guggenheim Memorial and Ingram Merrill Foundations. As director of the International Writing Program at the University of Iowa since 2000, Merrill has conducted cultural diplomacy missions to more than fifty countries. He served on the U.S. National Commission for UNESCO from 2011-2018, and in April 2012 President Barack Obama appointed him to the National Council on the Humanities.