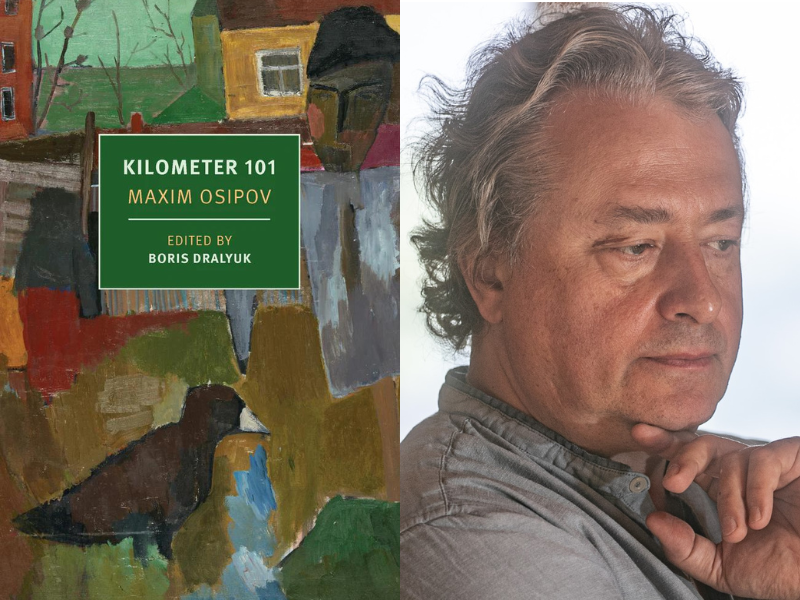 Join the Transnational Literature Series at Brookline Booksmith for an in-store event with author Maxim Osipov to discuss and celebrate the release of Kilometer 101. He will be in conversation with essayist and critic Becca Rothfeld.

The town of Tarusa lies 101 kilometers outside Moscow, far enough to have served, under Soviet rule, as a place where former political prisoners and other “undesirables” could legally settle. Lying between the center of power and the provinces, between the modern urban capital and the countryside, Tarusa is the perfect place from which to observe a Russia that, in Maxim Osipov’s words, “changes a lot [in the course of a decade], but in two centuries—not at all.” The stories and essays in this volume—a follow-up to his debut in English, Rock, Paper, Scissors—tackle major questions of modern life in and beyond Russia with Osipov’s trademark blend of daring and subtlety. Deceit, political pressure, ethnic discrimination, the urge to emigrate, and the fear of abandoning one’s home, as well as myriad generational debts and conflicts, are as complexly woven through these pieces as they are through the lives of Osipov’s fellow Russians and through our own.

What binds the prose in this volume is not only a set of concerns, however, but also Osipov’s penetrating insights and fearless realism. “Dreams fall away, one after another,” he writes in the opening essay, “some because they come true, but most because they prove pointless.” Yet, as he reminds us in the final essay, when viewed from ground level, “life tends not towards depletion, towards zero, but, on the contrary, towards repletion, fullness.” Edited by Boris Dralyuk and translated from the Russian by Boris Dralyuk, Nicolas Pasternak Slater, and Alex Fleming

Maxim Osipov is a Russian writer and cardiologist. In the early 1990s he was a research fellow at the University of California, San Francisco, before returning to Moscow, where he continued to practice medicine and also founded a publishing house that specialized in medical, musical, and theological texts. In 2005, while working at a local hospital in Tarusa, a small town ninety miles from Moscow, Osipov established a charitable foundation to ensure the hospital’s survival. Since 2007, he has published short stories, novellas, essays, and plays, and has won a number of literary prizes for his fiction. He has published six collections of prose, and his plays have been staged all across Russia. Osipov’s writings have been translated into more than a dozen languages. He lived in Tarusa up until February 2022, when he moved to Germany.

Moderator Becca Rothfeld is an essayist, critic, and contributing editor at The Point and the Boston Review. Her work has appeared in the New Yorker, the New York Times Book Review, the New York Review of Books, the Yale Review, and more. Her debut essay collection is forthcoming from Holt (US) and Virago (UK). In 2021, she was an inaugural recipient of the Robert B. Silvers Prize for Literary Criticism. She is in the process of finishing a PhD in philosophy at Harvard.