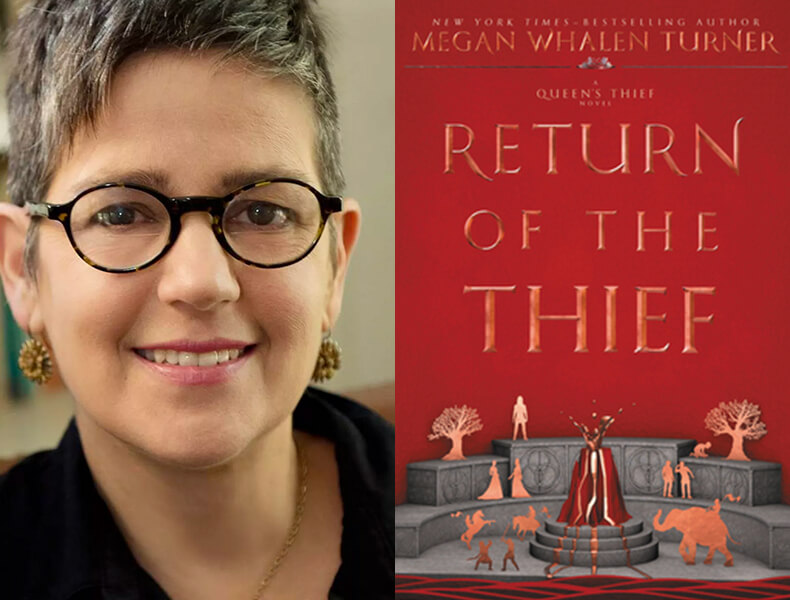 We are thrilled to host Megan Whalen Turner for the launch of the sixth and final book in the Queen's Thief series, Return of the Thief. Join us for Queen's Thief trivia at 7PM ET, followed by a conversation and Q&A with Megan at 8PM ET.

Return of the Thief draws to a conclusion 24 years of brilliant plotting, riveting characters, intricate politics, enigmatic gods and quite a few olives (and jokes). The sixth and final book in the Queen's Thief series sees Eugenidies holding together a fragile alliance against both the terrible might of the Medes and the haunting threats within his own borders. New voices meet with familiar ones in this resounding and epic conclusion to a series that has become a beloved mythology to its fans, who have been reading their many copies of the books to pieces for over twenty years.

New York Times–bestselling author Megan Whalen Turner is the award-winning author of six novels set in the world of the Queen’s Thief. Megan Whalen Turner has been awarded a Newbery Honor and a Horn Book–Boston Globe Honor, and won the Los Angeles Times Book Award for Young Adult Literature.