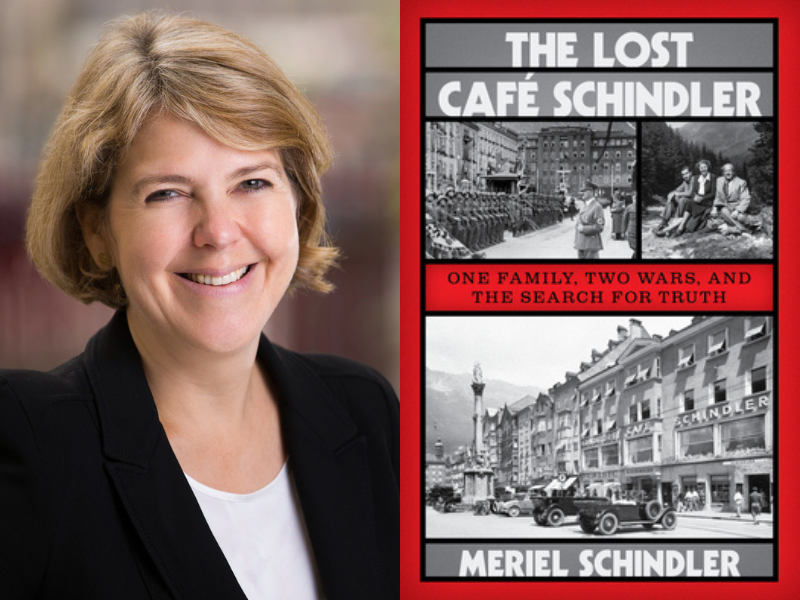 Celebrate the release of The Lost Cafe Schindler with author and family historian Meriel Schindler.

When Meriel’s father, Kurt, died in 2017, he left behind piles of Nazi-era documents related to her family’s fate in Innsbruck and a treasure trove of family albums reaching back to before World War I. After spending her adult life trying to keep her father at bay, Meriel was forced to confront not only their fractured relationship, but also the truth behind their family history. The result is THE LOST CAFÉ SCHINDLER, a sweeping memoir of a Jewish family spanning two world wars and its flight from Nazi-occupied Austria. Meriel re-creates the journey of the fascinating Schindler family, whose relatives included the Jewish doctor who treated Hitler’s mother when she was dying of breast cancer; the Kafka family; and Alma Schindler, the wife of Gustav Mahler. But the narrative centers around the Café Schindler, famous for its pastries, home-distilled liquors, live entertainment, and hospitality—which was expropriated during the Nazi era. This is a story of tragic loss—several relatives disappeared in Terezín and Auschwitz—but ultimately one of reclamation and reconciliation. Peter Hayes writes, “This almost unbearably touching book traces an extraordinarily diligent and sensitive process of family rediscovery,“ while Debórah Dwork raves, “Lovingly written and astutely observed, The Lost Café Schindler is a meditation on loss: personal loss and loss of historic significance.”

Meriel Schindler is an employment lawyer, partner, and head of a team at the law firm Withers LLP, and is a trustee of the writing charity Arvon. She lives in London with her husband, Jeremy, and has three adult children.