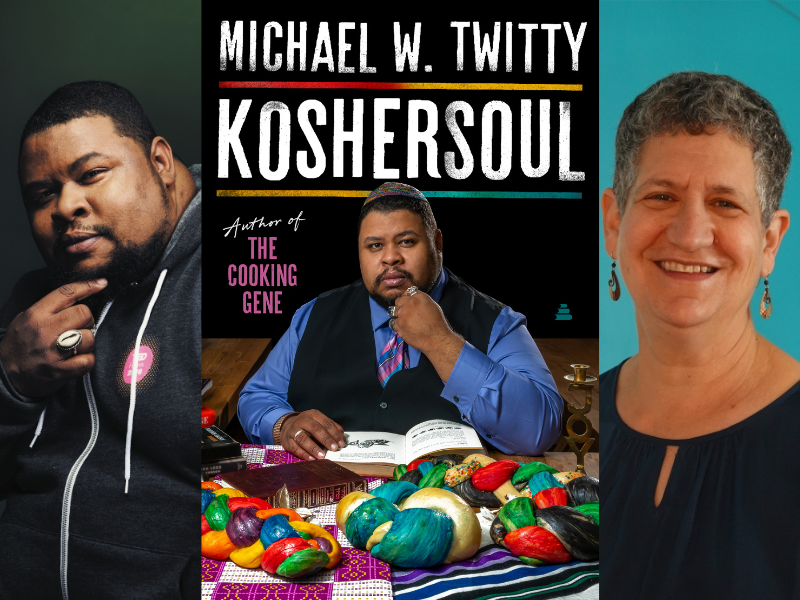 Celebrate the release of Koshersoul with author Michael Twitty, in conversation with Rabbi Toba Spitzer!

Books purchased on the registration page will include a signed bookplate.

Koshersoul: The Faith and Food Journey of an African American Jew

The James Beard award-winning author of the acclaimed The Cooking Gene explores the cultural crossroads of Jewish and African diaspora cuisine and issues of memory, identity, and food.

In Koshersoul, Michael W. Twitty considers the marriage of two of the most distinctive culinary cultures in the world today: the foods and traditions of the African Atlantic and the global Jewish diaspora. To Twitty, the creation of African-Jewish cooking is a conversation of migrations and a dialogue of diasporas offering a rich background for inventive recipes and the people who create them.

The question that most intrigues him is not just who makes the food, but how the food makes the people. Jews of Color are not outliers, Twitty contends, but significant and meaningful cultural creators in both Black and Jewish civilizations. Koshersoul also explores how food has shaped the journeys of numerous cooks, including Twitty’s own passage to and within Judaism.

As intimate, thought-provoking, and profound as The Cooking Gene, this remarkable book teases the senses as it offers sustenance for the soul.

Michael W. Twitty is the author of The Cooking Gene, winner of the James Beard award for writing about food and the Book of the Year. He is a highly sought after speaker and consultant.

Rabbi Toba Spitzer is a popular teacher of courses on Judaism and economic justice, Reconstructionist Judaism, new approaches to thinking about God, and the practice of integrating Jewish spiritual and ethical teachings into daily life. She served as the President of the Reconstructionist Rabbinical Association from 2007-2009, and was the first LGBTQ rabbi to head a national rabbinic organization. She has received the honor of being included in Newsweek’s Top 50 Rabbis in America list and the 2010 Forward list of 50 Female Rabbis Who Are Making A Difference. Since 1997, she has been the spiritual leader of Congregation Dorshei Tzedek in Newton, MA.