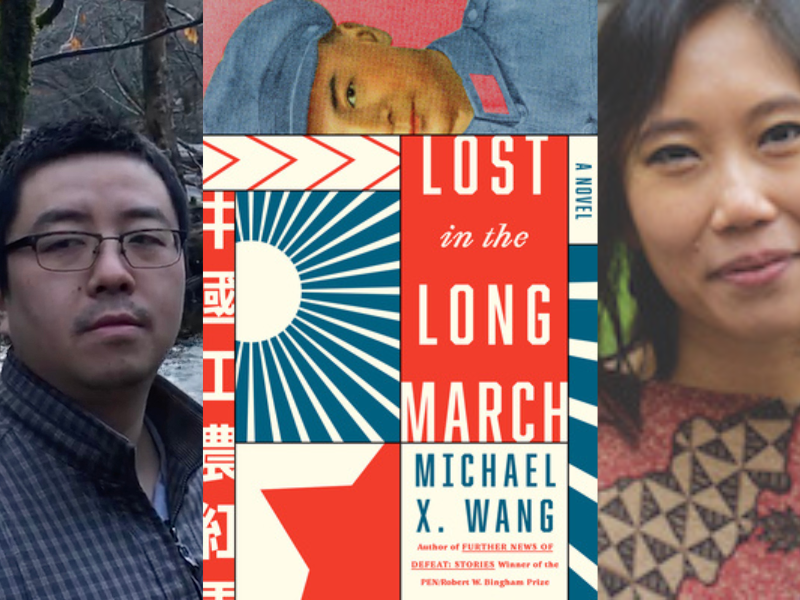 Celebrate the release of Lost in the Long March with author Michael X. Wang, in conversation with YZ Chin!

This virtual event is free to attend. If you're able to purchase a book, thank you - your book purchases support the author and help us to continue offering author events!

Lost in the Long March: A Novel

“In the best traditions of historical fiction, Michael X. Wang reimagines the Long March, a foundational epic of communist China, on an intimately human scale. His vivid rendering of the young men and women of Mao’s army reminds me of Ha Jin.” —Peter Ho Davies, award-winning author of The Fortunes and A Lie Someone Told You About Yourself

From a rising literary star, an epic historical novel, set against the tense backdrop of the Long March and Mao’s rise to power, that tells a powerful and moving story of two ordinary people.

China, 1934: A naive orphan and shy gunsmith, Ping has fallen in love with Yong, who is a sophisticated veteran, a skilled marksman, and a true believer in Marxist ideology. Winning her affections will take an ideological battle—something he does not understand. To make matters worse, Yong has shown interest in Ping’s best friend, Luo. On the eve of a great Communist defeat, Ping sabotages Luo’s rifle, causing the bullet to backfire into his friend’s head. The army begins its year-long retreat, known as the Long March, and Yong turns to Ping for comfort and companionship. Ping deeply regrets killing his friend, and as his relationship with Yong blossoms, he is saddened that it will always be colored by guilt.

Yong soon becomes pregnant. She hates the way the baby inside is changing her, both physically and emotionally. The Red Army can’t retreat with a crying infant, so they need to find someone close to take the baby in. Ping and Yong leave their son with a woman, promising to return once the war is won. When World War II breaks out and Japanese soldiers arrive, their 12-year-old son decides to enlist in the Japanese army to find his parents, though he quickly begins to fear for his life...

Deeply moving and brilliantly written, Michael X. Wang's Lost in the Long March is an exploration of how the history of a country is always its people, though their stories are often the first to be lost.

Michael X. Wang was born in Fenyang, a small coal-mining city in China’s Shanxi province, and immigrated to the United States when he was 6. His collection Further News of Defeat won the 2021 PEN/Robert W. Bingham Prize for Debut Short Story Collection and the 2022 Great Lakes Colleges Association New Writers Award for Fiction, and was a finalist for the 2021 CLMP Firecracker Award. Wang received his MFA in Fiction from Purdue University and PhD in literature from Florida State University. He currently lives in Arkansas.

YZ Chin is the author of Edge Case, a New York Times Editors' Choice and an NPR pick for best books of 2021. She is also the author of Though I Get Home, winner of the Louise Meriwether First Book Prize. YZ is a MacDowell fellow and has translated Li Zi Shu's The Age of Goodbyes into English. Born and raised in Taiping, Malaysia, she now lives in New York.