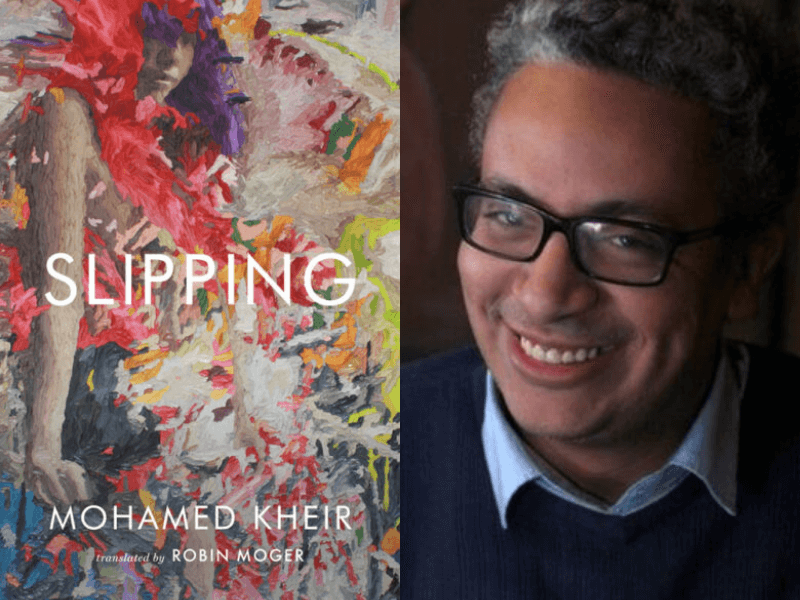 Join the Transnational Literature Series at Brookline Booksmith for a virtual event with author Mohamed Kheir and translator Robin Moger to discuss Slipping. They will be in conversation with writer Yasmine El Rashidi.

A struggling journalist named Seif is introduced to a former exile with an encyclopedic knowledge of Egypt’s obscure, magical places. Together, as explorer and guide, they step into the fragmented, elusive world the Arab Spring left behind. They trek to an affluent neighborhood where giant corpse flowers rain from the sky. They join an anonymous crowd in the dark, hallucinating together before a bare cave wall. They descend a set of stairs to the spot along the Nile River where, it’s been said, you can walk on water. But what begins as a fantastical excursion through a splintered nation quickly winds its way inward as Seif begins to piece together the trauma of his own past, including what happened to Alya, his lover with the remarkable ability to sing any sound: crashing waves, fluttering wings, a roaring inferno.

Musical and parabolic, Slipping seeks nothing less than to accept the world in all its mystery. An innovative novel that searches for meaning within the haze of trauma, it generously portrays the overlooked miracles of everyday life, and attempts to reconcile past failures—both personal and societal—with a daunting future. Delicately translated from Arabic by Robin Moger, this is a profound introduction to the imagination of Mohamed Kheir, one of the most exciting writers working in Egypt today.

Mohamed Kheir is a novelist, poet, short story writer, journalist, and lyricist. His short story collections Remsh Al Ein (2016) and Afarit Al Radio (2011) both received The Sawiris Cultural Award, and Leil Khargi (2001) was awarded the Egyptian Ministry of Culture Award for poetry. Slipping is his second novel and his first to be translated into English. He lives in Egypt.

Robin Moger is a translator of Arabic to English currently based in Cape Town, South Africa. His translations of prose and poetry have appeared in Blackbox Manifold, The White Review, Tentacular, Asymptote, Words Without Borders, Seedings, The Johannesburg Review of Books, The Washington Square Review, and others. He has translated several novels and prose works into English including Iman Mersal’s How To Mend, Nael Eltoukhy’s The Women of Karantina, Youssef Rakha’s The Crocodiles, and Haytham El Wardany’s The Book Of Sleep.

Moderator Yasmine El Rashidi is an Egyptian writer. She is the author of The Battle for Egypt: Dispatches from the Revolution and Chronicle of a Last Summer: A Novel of Egypt. She is a regular contributor to The New York Review of Books, and is an editor of the Middle East arts and culture quarterly Bidoun. She lives in Cairo.