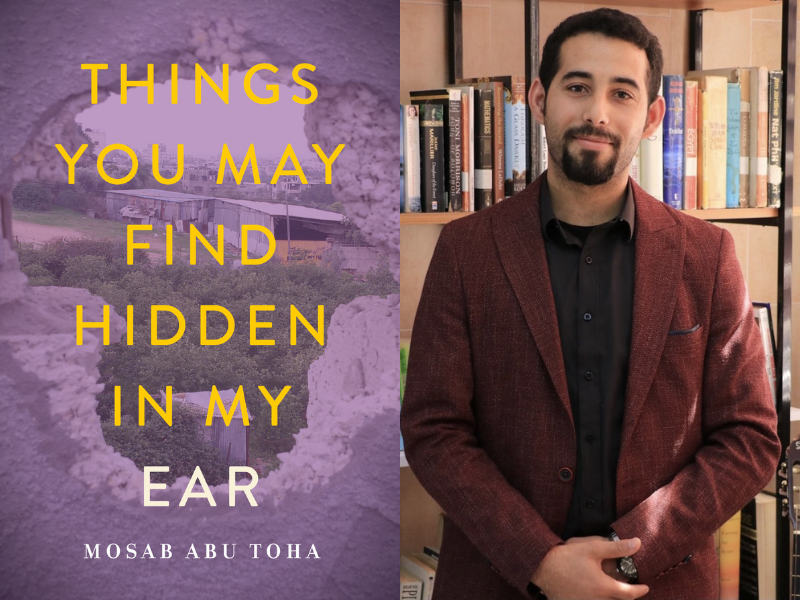 Join the Transnational Literature Series at Brookline Booksmith for a virtual event with poet Mosab Abu Toha to discuss and celebrate the release of Things You May Find Hidden in My Ear: Poems from Gaza with writer Naomi Shihab Nye.

In this poetry debut Mosab Abu Toha writes about his life under siege in Gaza, first as a child, and then as a young father. A survivor of four brutal military attacks, he bears witness to a grinding cycle of destruction and assault, and yet, his poetry is inspired by a profound humanity.

These poems emerge directly from the experience of growing up and living in constant lockdown, and often under direct attack. Like Gaza itself, they are filled with rubble and the ever-present menace of surveillance drones policing a people unwelcome in their own land, and they are also suffused with the smell of tea, roses in bloom, and the view of the sea at sunset. Children are born, families continue traditions, students attend university, and libraries rise from the ruins as Palestinians go on about their lives, creating beauty and finding new ways to survive.

Accompanied by an in-depth interview, conducted by Ammiel Alcalay, in which Abu Toha discusses life in Gaza, his family origins, and how he came to poetry.

Mosab Abu Toha is a Palestinian poet, scholar, and librarian who was born in Gaza and has spent his life there. A graduate in English language teaching and literature, he taught English at the United Nations Relief and Works Agency (UNRWA) schools in Gaza from 2016 until 2019 and is the founder of the Edward Said Library, Gaza’s first English-language library. Abu Toha was a Visiting Poet in the Department of Comparative Literature at Harvard University; a Visiting Librarian at Harvard’s Houghton Library; and a Religion, Conflict, and Peace Initiative Fellow at the Harvard Divinity School. He is also a columnist for Arrowsmith Press, and his writings from Gaza have also appeared in The Nation and Literary Hub. His poems have been published on the Poetry Foundation’s website, in Poetry Magazine, Banipal, Solstice, The Markaz Review, The New Arab, Peripheries, and other journals.

Moderator Naomi Shihab Nye is the author and/or editor of more than thirty volumes including five collections of poetry from BOA Editions: Red Suitcase, Fuel, You & Yours, Transfer, and ﻿The Tiny Journalist. She has been a Lannan Fellow, a Guggenheim Fellow, and a Witter Bynner Fellow. Her numerous awards include a Lavan Award from the Academy of American Poets, the Isabella Gardner Poetry Award from BOA, the Lee Bennett Hopkins Poetry Award, the Patterson Poetry Prize, four Pushcart Prizes, the Robert Creeley Prize the Betty Prize from Poets House for her service to poetry, and the Lon Tinkle Award for Lifetime Achievement from the Texas Institute of Letters. She served on the Board of Chancellors of the Academy of American Poets from 2010–2015, and in May 2019 she was named the 2019–2021 Young People's Poet Laureate by the Poetry Foundation.