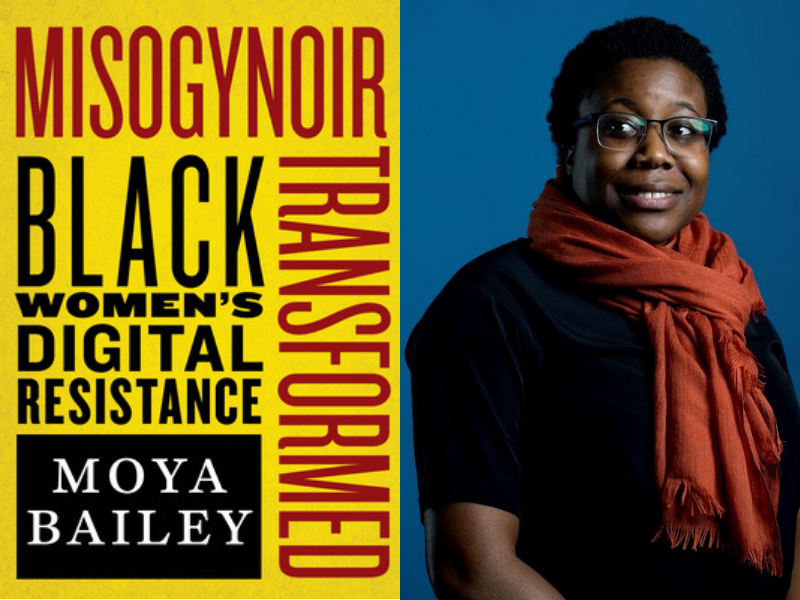 Moya Bailey and Chanda Prescod-Weinstein delve into the concept of misogynoir & explore the ways in which Black women creatively and courageously use social media to combat it.

Books purchased on the registration page will include a signed bookplate!

Where racism and sexism meet-an understanding of anti-Black misogyny.

When Moya Bailey first coined the term misogynoir, she defined it as the ways anti-Black and misogynistic representation shape broader ideas about Black women, particularly in visual culture and digital spaces. She had no idea that the term would go viral, touching a cultural nerve and quickly entering into the lexicon. Misogynoir now has its own Wikipedia page and hashtag, and has been featured on Comedy Central's The Daily Show and CNN's Cuomo Prime Time. In Misogynoir Transformed, Bailey delves into her groundbreaking concept, highlighting Black women's digital resistance to anti-Black misogyny on YouTube, Facebook, Tumblr, and other platforms.

At a time when Black women are depicted as more ugly, deficient, hypersexual, and unhealthy than their non-Black counterparts, Bailey explores how Black women have bravely used social-media platforms to confront misogynoir in a number of courageous-and, most importantly, effective-ways. Focusing on queer and trans Black women, she shows us the importance of carving out digital spaces, where communities are built around queer Black webshows and hashtags like #GirlsLikeUs.

Moya Bailey is Assistant Professor of Africana Studies and the program in Women’s, Gender, and Sexuality Studies at Northeastern University. Bailey currently curates the #transformDH Tumblr initiative in Digital Humanities and is also the digital alchemist for the Octavia E. Butler Legacy Network. She is an MLK Visiting Scholar at MIT for the 2020–2021 academic year.

Moderator Dr. Chanda Prescod-Weinstein (she/they) is an assistant professor of physics and core faculty in women’s and gender studies at the University of New Hampshire. Her first book, The Disordered Cosmos: A Journey into Dark Matter, Spacetime, and Dreams Deferred, is out now from Bold Type Books.