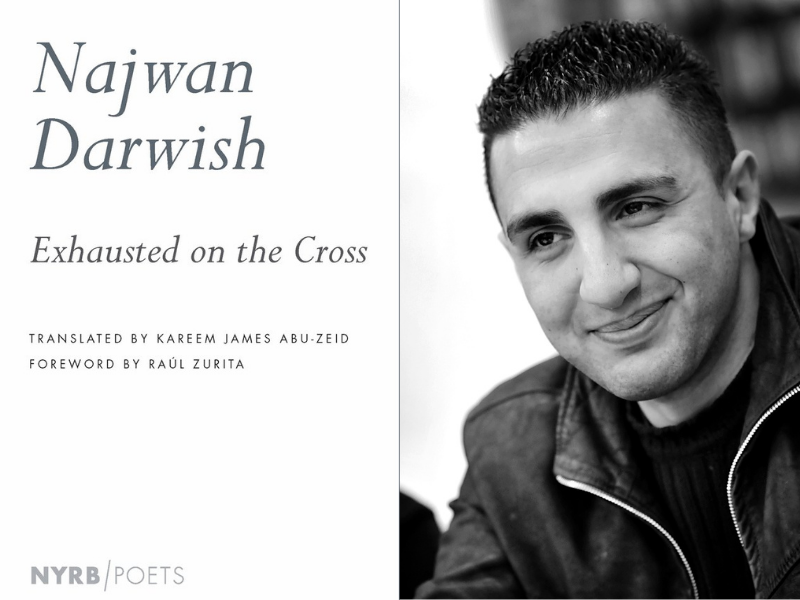 Join the Transnational Literature Series at Brookline Booksmith for a virtual Nakba Day event with poet Najwan Darwish and translator Kareem James Abu-Zeid to discuss Exhausted on the Cross. They'll be in conversation with writer Nathalie Handal.

Presented in partnership with the Boston Palestine Film Festival.

“We drag histories behind us,” the Palestinian poet Najwan Darwish writes in Exhausted on the Cross, “here / where there’s neither land / nor sky.” In pared-down lines, brilliantly translated from the Arabic by Kareem James Abu-Zeid, Darwish records what Raúl Zurita describes as “something immemorial, almost unspeakable”—a poetry driven by a “moral imperative” to be a “colossal record of violence and, at the same time, the no less colossal record of compassion.”

Darwish’s poems cross histories, cultures, and geographies, taking us from the grime of modern-day Shatila and the opulence of medieval Baghdad to the gardens of Samarkand and the open-air prison of present-day Gaza. We join the Persian poet Hafez in the conquered city of Shiraz and converse with the Prophet Mohammad in Medina. Poem after poem evokes the humor in the face of despair, the hope in the face of nightmare.

Najwan Darwish is one of the foremost Arabic-language poets of his generation, born in Jerusalem in 1978, thirty years after his family was exiled. Since the publication of his first collection in 2000, his poetry has been acclaimed across the Arab world and has been translated into fifteen languages.

Kareem James Abu-Zeid is a translator, editor, writer, teacher, and scholar who works across multiple languages who has received numerous awards, fellowships, and honors including PEN Center USA's 2017 Translation Prize and a 2018 National Endowment for the Arts translation grant. He lives between southern India and Santa Fe, New Mexico.

Moderator Nathalie Handal is a poet, playwright, nonfiction, and literary travel writer. She is the author of seven poetry collections including Life in a Country Album, winner of the Palestine Book Award, and the flash collection The Republics, winner of the Virginia Faulkner Award for Excellence in Writing, and the Arab American Book Award. She is also the editor of the groundbreaking classic The Poetry of Arab Women: A Contemporary Anthology. She is a professor at Columbia University and writes the literary travel columns “The City and the Writer” for Words without Borders and “Journeys” for Publishers Weekly Arabic.

Now in its fifteenth year, the Boston Palestine Film Festival showcases the Palestinian narrative through the medium of cinema and the arts, to audiences in the New England area. The Festival has screened at venues throughout the area, including the Museum of Fine Arts Boston, Brattle Theatre, Paramount Center Bright Family Screening Room, and the Somerville Theatre. Their 2021 program will be taking place in October, in person and/or virtually.