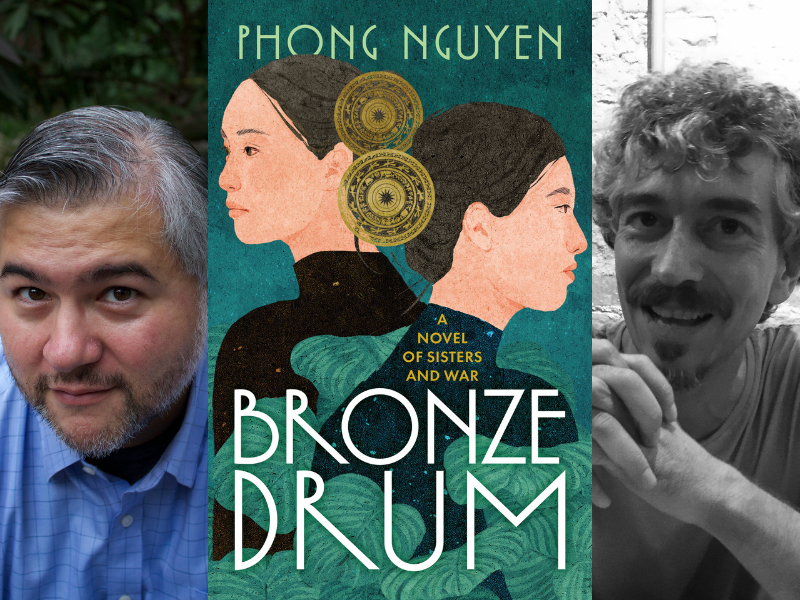 Celebrate the release of Bronze Drum with author Phong Nguyen, in conversation with William Pierce!

Books purchased on the registration page include a bookplate signed by the author.

A stunning novel of ancient Vietnam based on the true story of two warrior sisters who raised an army of women to overthrow the Han Chinese and rule as kings over a united people, for readers of Circe and The Night Tiger.

In 40 CE, in the Au Lac region of ancient Vietnam, two daughters of a Vietnamese Lord fill their days training, studying, and trying to stay true to Vietnamese traditions. While Trung Trac is disciplined and wise, always excelling in her duty, Trung Nhi is fierce and free spirited, more concerned with spending time in the gardens and with lovers.

But these sister's lives—and the lives of their people—are shadowed by the oppressive rule of the Han Chinese. They are forced to adopt Confucian teachings, secure marriages, and pay ever‑increasing taxes. As the people's frustration boils over, the country comes ever closer to the edge of war.

When Trung Trac and Trung Nhi's father is executed, their world comes crashing down around them. With no men to save them against the Han's encroaching regime, they must rise and unite the women of Vietnam into an army. Solidifying their status as champions of women and Vietnam, they usher in a period of freedom and independence for their people.

Vivid, lyrical, and filled with adventure, Bronze Drum is a true story of standing up for one's people, culture, and country that has been passed down through generations of Vietnamese families through oral tradition. Phong Nguyen's breathtaking novel takes these real women out of legends and celebrates their loves, losses, and resilience in this inspirational story of women's strength and power even in the face of the greatest obstacles.

Phong Nguyen is the author of three novels: Bronze Drum (Grand Central Publishing, 2021), Roundabout: An Improvisational Fiction (Moon City Press, 2020), and The Adventures of Joe Harper (Outpost19, 2016, winner of the Prairie Heritage Book Award); and two short fiction collections: Pages from the Textbook of Alternate History (Mastodon Publishing, 2019) and Memory Sickness and Other Stories (Elixir Press, 2011). He is the Miller Family Endowed Chair in Literature and Writing at the University of Missouri, where he teaches fiction-writing.

Moderator William Pierce is coeditor of the literary and cultural magazine AGNI. Excerpts from his novel manuscript Twenty Sixteen can be found in Harvard Review, on the Freeman’s channel at Literary Hub, and in Western Humanities Review. His short fiction has appeared in Granta, Ecotone, American Literary Review, and elsewhere, and he is the author of Reality Hunger: On Karl Ove Knausgaard’s My Struggle, a monograph first serialized as a three-part essay at The Los Angeles Review of Books. With E. C. Osondu, he coedited The AGNI Portfolio of African Fiction.