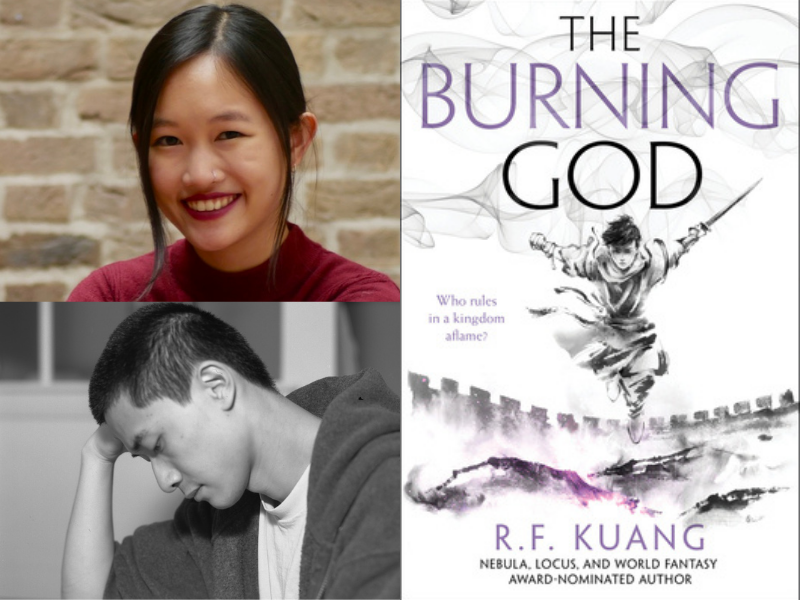 Get ready for R.F. Kuang to destroy you emotionally! The Burning God is the third and final installment of the Poppy War trilogy--the acclaimed, award-winning epic fantasy that combines the history of twentieth-century China with a gripping world of gods and monsters, to devastating and enthralling effect.

After saving her nation of Nikan from foreign invaders and battling the evil Empress Su Daji in a brutal civil war, Fang Runin was betrayed by allies and left for dead.

Despite her losses, Rin holds out hope for the people of the southern provinces and especially the village of Tikany, her home. Returning to her roots, Rin meets difficult challenges—and unexpected opportunities. Rin quickly realizes that the real power in Nikan lies with the millions of common people who thirst for vengeance and revere her as a goddess of salvation.

Rin will use every weapon to defeat the Dragon Republic, the colonizing Hesperians, and all who threaten the shamanic arts and their practitioners. Her power and influence grow--will she be strong enough to resist the intoxicating voice urging her to burn the world and everything in it?

R.F. Kuang studies modern Chinese history. She has a BA from Georgetown University and is currently a graduate student in the United Kingdom on a Marshall Scholarship.

Ken Liu is an award-winning American author of speculative fiction. His collection, The Paper Menagerie and Other Stories, has been published in more than a dozen languages. Liu’s other works include The Grace of Kings, The Wall of Storms, and Star Wars tie-in The Legends of Luke Skywalker, and a second collection The Hidden Girl and Other Stories. He has been involved in multiple media adaptations of his work including the short story “Good Hunting,” adapted as an episode in Netflix’s animated series Love, Death + Robots; and AMC’s Pantheon, adapted from an interconnected series of short stories. “The Hidden Girl,” “The Message,” and The Grace of Kings have also been optioned for development. Liu previously worked as a software engineer, corporate lawyer, and litigation consultant. He frequently speaks at conferences and universities on topics including futurism, cryptocurrency, the mathematics of origami, and others. Liu lives with his family near Boston, Massachusetts.