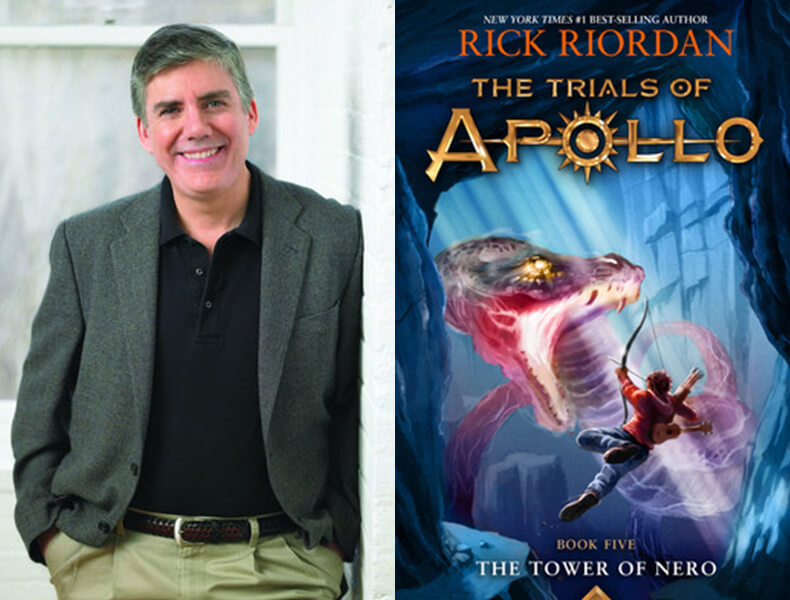 Join Brookline Booksmith and Rick Riordan for the virtual launch of THE TOWER OF NERO tour! Every ticket comes with a copy of the book. Click the link to get your tickets!

At last, the breathtaking, action-packed finale of the #1 bestselling Trials of Apollo! Will the Greek god Apollo, cast down to earth in the pathetic moral form of a teenager named Lester Papadopoulos, finally regain his place on Mount Olympus? Lester’s demigod friends at Camp Jupiter just helped him survive attacks from bloodthirsty ghouls, an evil Roman king and his army of the undead, and the lethal emperors Caligula and Commodus. Now the former god and his demigod master Meg must follow a prophecy uncovered by Ella the harpy. Lester’s final challenge will be at the Tower of Nero, back in New York. Will Meg have a last showdown with her father? Will this helpless form of Apollo have to face his arch nemesis, Python? Who will be on hand at Camp Half-Blood to assist? These questions and more will be answered in this book that all demigods are eagerly awaiting.

Rick Riordan is the #1 New York Times bestselling author of the Percy Jackson and the Olympians series, the Kane Chronicles, the Heroes of Olympus, and Magnus Chase and the Gods of Asgard.