Roshani Chokshi with Kalyani Saxena: The Last Tale of the Flower Bride

Roshani Chokshi with Kalyani Saxena: The Last Tale of the Flower Bride 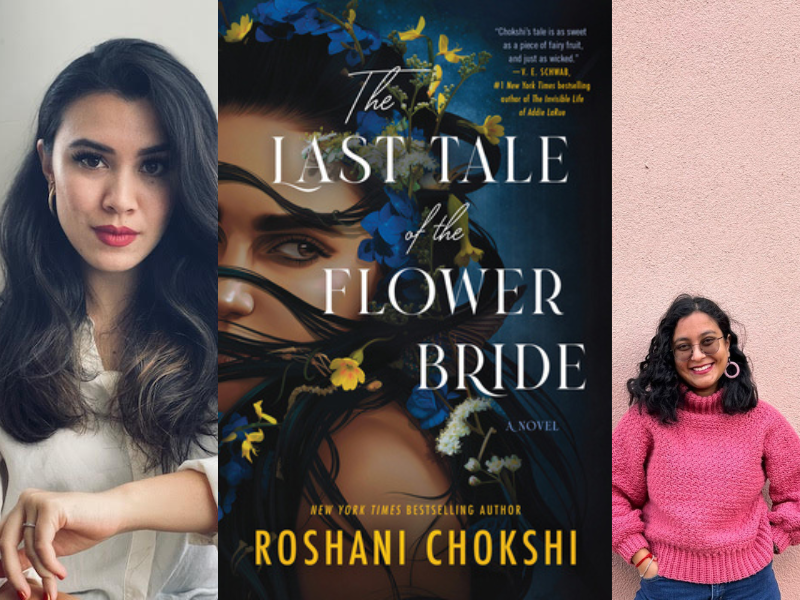 In person at Brookline Booksmith! Celebrate the release of The Last Tale of the Flower Bride with author Roshani Chokshi, in conversation with Kalyani Saxena.

This event is ticketed. Your ticket includes a seat at the event and a copy of The Last Tale of the Flower Bride. You will also be alerted to important details about the program, including safety requirements, cancellations, and book signing updates.

The Last Tale of the Flower Bride

"Chokshi's tale is as sweet as a piece of fairy fruit, and just as wicked. Every bite is velvet, every swallow is gold, and the taste lingers like a fever dream." — V. E. Schwab, #1 New York Times bestselling author of The Invisible Life of Addie LaRue

"Gorgeous and ornate, this sensual fairy tale illuminates the corrosive and redemptive power of both love and lies." — Holly Black, #1 New York Times bestselling author of Book of Night

A sumptuous, gothic-infused story about a marriage that is unraveled by dark secrets, a friendship cursed to end in tragedy, and the danger of believing in fairy tales—the breathtaking adult debut from New York Times bestselling author Roshani Chokshi.

Once upon a time, a man who believed in fairy tales married a beautiful, mysterious woman named Indigo Maxwell-Casteñada. He was a scholar of myths. She was heiress to a fortune. They exchanged gifts and stories and believed they would live happily ever after—and in exchange for her love, Indigo extracted a promise: that her bridegroom would never pry into her past.

But when Indigo learns that her estranged aunt is dying and the couple is forced to return to her childhood home, the House of Dreams, the bridegroom will soon find himself unable to resist. For within the crumbling manor’s extravagant rooms and musty halls, there lurks the shadow of another girl: Azure, Indigo’s dearest childhood friend who suddenly disappeared. As the house slowly reveals his wife’s secrets, the bridegroom will be forced to choose between reality and fantasy, even if doing so threatens to destroy their marriage . . . or their lives.

Combining the lush, haunting atmosphere of Mexican Gothic with the dreamy enchantment of The Invisible Life of Addie LaRue, The Last Tale of the Flower Bride is a spellbinding and darkly romantic page-turner about love and lies, secrets and betrayal, and the stories we tell ourselves to survive.

Roshani Chokshi is the New York Times bestselling author of books for middle grade and young adult readers that draw on world mythology and folklore. Her series includes The Star-Touched Queen duology, The Gilded Wolves, and Aru Shah and The End of Time, which was recently optioned for film by Paramount Pictures. She lives in Atlanta, Georgia. This is her adult debut.

Moderator Kalyani Saxena is an associate producer for Here & Now. As a producer, Kalyani is interested in exploring not just what our society thinks about race and culture but also how we came to think that way in the first place. When she’s not monologuing about her new favorite book, you can find Kalyani on Twitter or in a comfy armchair crocheting a sweater.