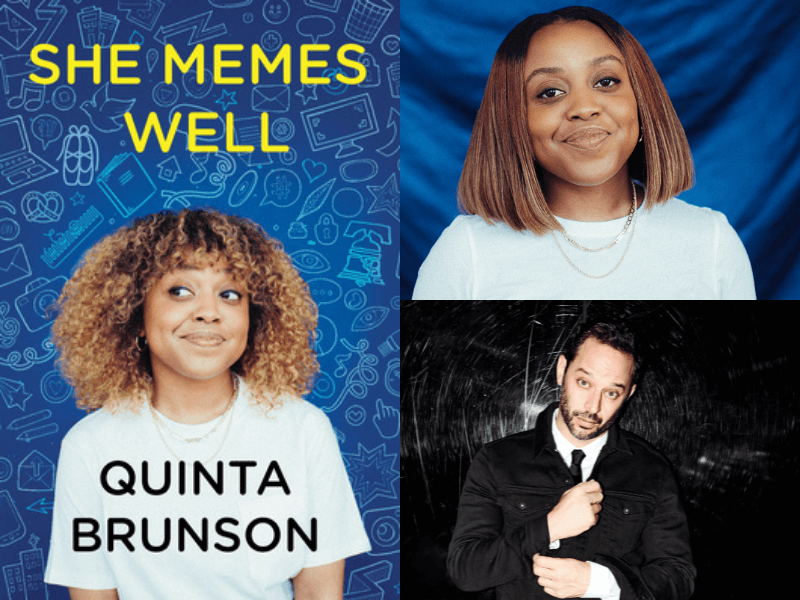 Each ticket includes a SIGNED copy of Quinta’s new book She Memes Well + access to an exclusive virtual conversation with Quinta Brunson and Nick Kroll.

“In SHE MEMES WELL, Quinta gives more than a peek behind the curtain. She invites us in, lets us poke around and offers a balm for our aching souls. She moves beyond the jokes into something much deeper, something we may not recognize we need. She is the friend, sister, lover, cool co-worker we all wished we had.” –Gabrielle Union, actress and New York Times bestselling author of We’re Going to Need More Wine

“Quinta Brunson may meme well, but to limit her to just being an Internet personality would be a disservice to you and her. She (and this book) are equal parts hilarious and thoughtful. I’m a fan of Quinta as a writer, as a performer and, most importantly, as a person. I promise after reading her book, you will be a fan too.” –Nick Kroll, actor, comedian, and producer

“The luminescent Quinta Brunson, who has already captivated the hearts of internet and television viewers alike, now hammers home her brilliance with the written word. One thing that really stuck with me was her age when she first saw Chocolate Rain. She is very young. Enjoy.” –Chelsea Peretti, comedian and actor

*Please note that this show will take place over Zoom*

Named one of Forbes’ “30 Under 30 in Hollywood & Entertainment” and one of The Hollywood Reporter’s “Next Gen” rising young stars of 2020, award-nominated actor, writer, and producer Quinta Brunson has quickly made a name for herself as a powerful force within the entertainment industry.

This year Brunson is slated to release her debut book She Memes Well (Houghton Mifflin Harcourt Publishing), a collection of deeply personal and funny essays featuring anecdotes about trying to make it when you’re broke, overcoming self-doubt and depression, and using humor to navigate a career in unusual directions. Throughout the debut essay collection, Brunson applies her trademark humor and heart throughout anecdotes that range from the funny and zany to more grounded material about rising up the ranks in a predominantly white industry. “She Memes Well” is set to hit bookshelves June 15, 2021.

On the television front Brunson most recently starred in HBO’s critically acclaimed sketch comedy series A Black Lady Sketch Show, opposite Robin Thede, Gabrielle Dennis, and Ashley Nicole Black.  Created and written by Thede and executive produced by Issa Rae, A Black Lady Sketch Show is a narrative series set in a limitless magical reality full of dynamic, hilarious characters and celebrity guests.  The show presents sketches from week to week that are performed by a core cast of black women, co-starring Brunson.  A Black Lady Sketch Show is currently available to stream its first season on HBO platforms.

Originally from Philadelphia, PA, Brunson started her journey at The Second City in Chicago and burst onto the entertainment scene in 2014 when the series she created, The Girl Who’s Never Been on a Nice Date went viral on YouTube and Instagram, making it one of the first series to gain a mass following on both digital platforms.  Since then, Brunson’s original content has reached hundreds of millions of people and her followers across Facebook, Instagram, Twitter, and YouTube have hit 2.5 million and counting.  Brunson’s online success quickly attracted the attention of BuzzFeed, where she landed an initial job as a video producer.  Shortly after, Brunson’s position quickly grew as she sold two web series as a development partner with BuzzFeed Motion Pictures: the scripted comedy Broke (which she wrote, produced, and starred in) for YouTube Red and Up for Adoption, which was produced by Verizon’s go90.  Brunson’s performance in Broke was nominated for Best Acting in a Comedy at the 2017 Streamy Awards.

Since leaving BuzzFeed in 2018, Brunson’s career as a writer, producer, and actor has skyrocketed.  She landed a lead role in The CW pilot The End of the World as We Know It, she wrote, produced, and starred in the series Quinta vs. Everything for Facebook Watch, and also wrote and sold a multi-cam comedy pilot alongside Larry Wilmore and Jermaine Fowler for CBS with ABC Studios.  Brunson has also appeared on ABC’s Single Parents, and The CW’s iZombie.  Brunson has also lent her voice to a plethora of projects, including Adult Swim’s Lazor Wulf (where she is also a staff writer) and season four of Netflix’s Big Mouth.  She also stays busy working on branded content for global corporations which have included: Google, Amazon, and Target.

Nick Kroll has established himself as one of today’s most sought-after creators, writers, producers, and actors in both film and television.

Kroll co-created, writes, produces and performs over 30 voices on the Emmy-Nominated Netflix animated series BIG MOUTH, which is based on his childhood. The show has garnered numerous accolades including 2020 and 2019 Emmy Award nominations for “Outstanding Animated Program,” a 2020 Critics Choice Award nomination for “Best Animated Series,” a 2020 Emmy Award for “Outstanding Derivative Interactive Program,” a 2019 Annie Award for “Best General Audience Animated Television/Broadcast Production,” and a 2019 Critics’ Choice Award in the category of “Best Animated Series.” Season 4 premiered in December 2020 and has been renewed for an additional two seasons.  BIG MOUTH  has been heralded by Vanity Fair as “one of TV’s most honest depictions of growing up.”

Kroll and the BIG MOUTH team, Andrew Goldberg, Mark Levin, Jennifer Flackett and Kelly Galuska also announced their newest project for Netflix titled HUMAN RESOURCES. Kroll serves as co-creator and executive producer on the workplace comedy which will be set in the same world as the BIG MOUTH monsters.

Kroll recently announced the launch of his production company, Good At Business. Under his new banner, Good At Business is developing and adaptation of Calvin Kasulke’s SEVERAL PEOPLE ARE TYPING as a TV series. SEVERAL PEOPLE ARE TYPING is the first novel narrated entirely through Slack chats.  Kasulke’s darkly funny debut upends our new COVID-era workplace—the virtual office.

Upcoming, Kroll will star in Olivia Wilde’s New Line thriller, DONT WORRY DARLING alongside Florence Pugh, Harry Styles, and Chris Pine.  Written by Katie Silberman and based off a spec script by Shane and Carey Van Dyke, the film is set in an isolated, utopian community in the 1950s California desert.

Also upcoming, Kroll will reprise his role as “Uncle Fester” in THE ADDAMS FAMILY 2 – set to release in October 2021 – as well as his role as Gunter in SING 2, in theaters holiday 2021. Kroll will also star in the upcoming film HOW IT ENDS, premiering at Sundance in 2021, as well as guest star as Edgar Allen Poe in the upcoming Season 2 of Apple’s DICKINSON, which premiered on January 8, 2021.

This past year, Kroll and John Mulaney released a new podcast  OH, HELLO: THE P’DCAST, a spinoff of their critically acclaimed show  OH, HELLO ON BROADWAY. The  first episode was released  on April 3, 2020  and all  proceeds were donated to various charitable organizations supporting COVID-19 relief, including United Way.  In 2017,  Kroll  wrapped his Broadway debut in OH, HELLO ON BROADWAY which ran for 138 performances and received rave reviews. He starred as “Gil Faizon” opposite John Mulaney as “George St. Geegland,” two elderly men from the Upper West Side of Manhattan. The show was filmed for a Netflix Original Comedy Special which is currently available for streaming.

In November 2020, Kroll completed his tour for  Nick Kroll: Middle-Aged Boy,  his stand-up comedy show, which hit multiple US cities with sold out shows in the UK and Australia. Kroll  was the creative executive producer on his sketch show, the KROLL SHOW, which ran for three seasons on Comedy Central.  Kroll also starred as “Ruxin” in the hit FX show THE LEAGUE for a total of seven seasons.