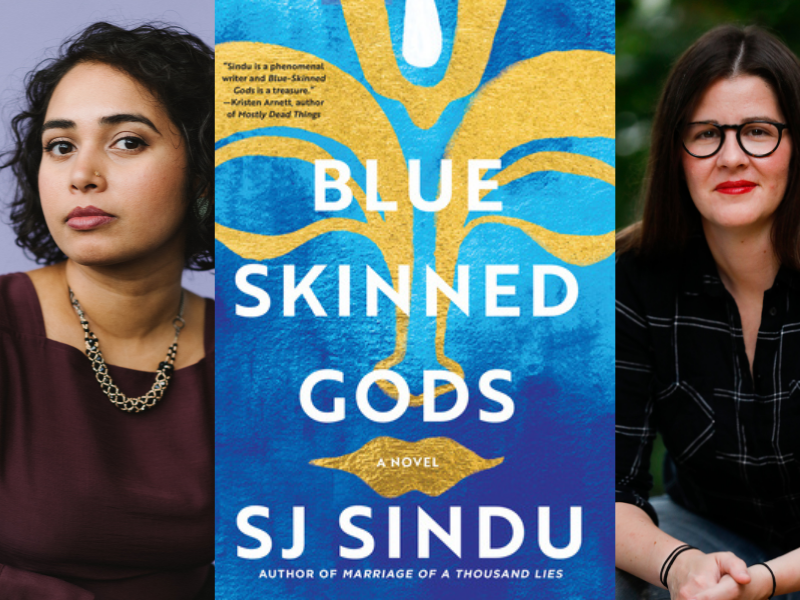 Books purchased at registration include a signed bookplate!

From the award-winning author of Marriage of a Thousand Lies comes a brilliantly written, globe-spanning novel about identity, faith, family, and sexuality.

In Tamil Nadu, India, a boy is born with blue skin. His father sets up an ashram, and the family makes a living off of the pilgrims who seek the child’s blessings and miracles, believing young Kalki to be the tenth human incarnation of the Hindu god Vishnu. In Kalki’s tenth year, he is confronted with three trials that will test his power and prove his divine status and, his father tells him, spread his fame worldwide. While he seems to pass them, Kalki begins to question his divinity.

Over the next decade, his family unravels, and every relationship he relied on—father, mother, aunt, uncle, cousin—starts falling apart. Traveling from India to the underground rock scene of New York City, Blue-Skinned Gods explores ethnic, gender, and sexual identities, and spans continents and faiths, in an expansive and heartfelt look at the need for belief in our globally interconnected world.

SJ Sindu is the author of the novel Marriage of a Thousand Lies, which won the Publishing Triangle Edmund White Debut Fiction Award, was a finalist for the Lambda Literary Award, and was an ALA Stonewall Honor Book; as well as the hybrid fiction and nonfiction chapbook I Once Met You But You Were Dead. She holds an MA in English from the University of Nebraska-Lincoln and a PhD in English and Creative Writing from Florida State University. Sindu teaches at the University of Toronto Scarborough.

Kristen Arnett is the author of the New York Times–bestselling novel Mostly Dead Things and the story collection Felt in the Jaw. A queer writer based in Florida, she has written for The New York Times, Guernica, BuzzFeed, McSweeney’s, The Guardian, Salon, and elsewhere. She has been a finalist for the Lambda Literary Award and a winner of the Ninth Letter Literary Award in Fiction and the Coil Book Award.