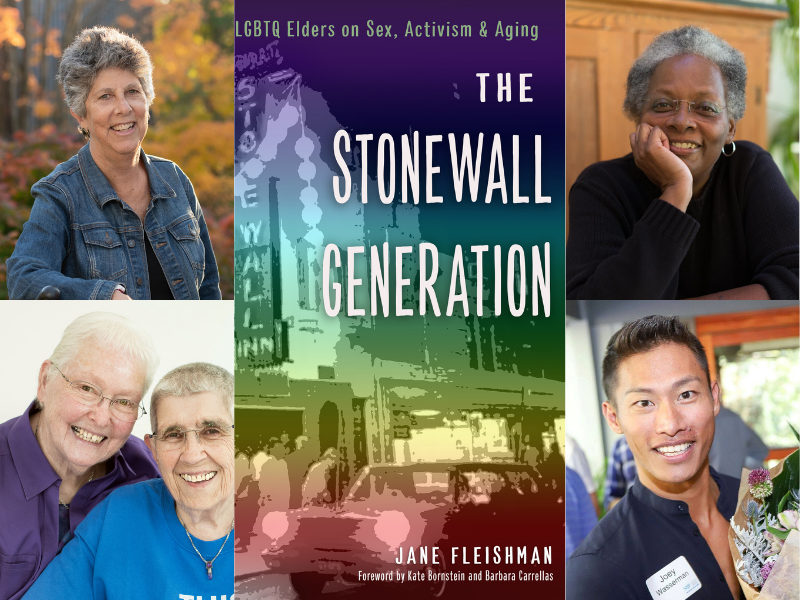 In The Stonewall Generation: LGBTQ Elders on Sex, Activism, and Aging, sexuality researcher Jane Fleishman shares the stories of fearless elders in the LGBTQ community who came of age around the time of the Stonewall Riots of 1969. In candid interviews, they lay bare their struggles, strengths, activism, and sexual liberation in the context of the political movements of the 1960s and 1970s and today.

Each of these inspiring figures has spent a lifetime fighting for the right to live, love, and be free, facing challenges arising from their sexual orientation, gender, race, ethnicity, religion, politics, disabilities, kinkiness, non-monogamy, and other identities. These are the stories of those whose lives were changed forever by Stonewall and who in turn became agents of change themselves.

Jane Fleishman, PhD, MS, MEd, is a certified sexuality educator, researcher, and writer with more than forty years of experience. In her recent TEDx talk, “Is it OK for Grandma to have sex?” she articulates her mission to promote the sexual well-being of older adults. She has co-chaired national conferences for the American Association of Sexuality Educators, Counselors and Therapists (AASECT) and the Sexuality and Aging Consortium; launched a popular column on sex and aging for Live Well magazine; co-hosted the Our Better Half podcast; and hosted a monthly radio show, Sex Matters.

Mandy Carter is a political activist and campaign manager with more than fifty years of experience fighting for social change. She is a co-founder of both Southerners On New Ground (SONG), an organization working toward intersectional liberation in the Southern states, and the National Black Justice Coalition. Mandy was also one of five national co-chairs of Obama LGBT Pride, the LGBT initiative of Barack Obama’s 2008 presidential campaign. In 2012, she was inducted into the International Federation of Black Pride’s Black LGBT Hall of Fame.

Edie Daly is the co-founder of Women's Energy Bank, a lesbian feminist organization that produced the feminist periodical Womyn’s Words for more than thirty years. She has worked as a global peace activist, traveling to Bosnia in 1993 and to the United Nation’s Fourth World Conference on Women in Beijing in 1995. Edie is a member of Old Lesbians Organizing for Change (OLOC); Women in Black, a worldwide organization of women standing for peaceful and nonviolent conflict resolution; and Southerners On New Ground (SONG).

Joey Wasserman is the Senior Director of Development of SAGE, one of the oldest and largest non-profit organizations dedicated to the needs of older LGBTQ people. After graduating from York College in York, Pennsylvania, he worked in an LGBT center for York Planned Parenthood, for the Jewish Community Center in York, and for the Human Rights Campaign in Washington, D.C. He has also worked on Democratic political campaigns, including Senator Hillary Clinton’s 2008 presidential run and for Representative Suzanne Kosmas of Florida.

SAGE is the country’s largest and oldest organization dedicated to improving the lives of LGBT older people. Founded in 1978 and headquartered in New York City, SAGE is a national organization that offers supportive services and consumer resources to LGBT older people and their caregivers. You can learn more at www.sageusa.org.