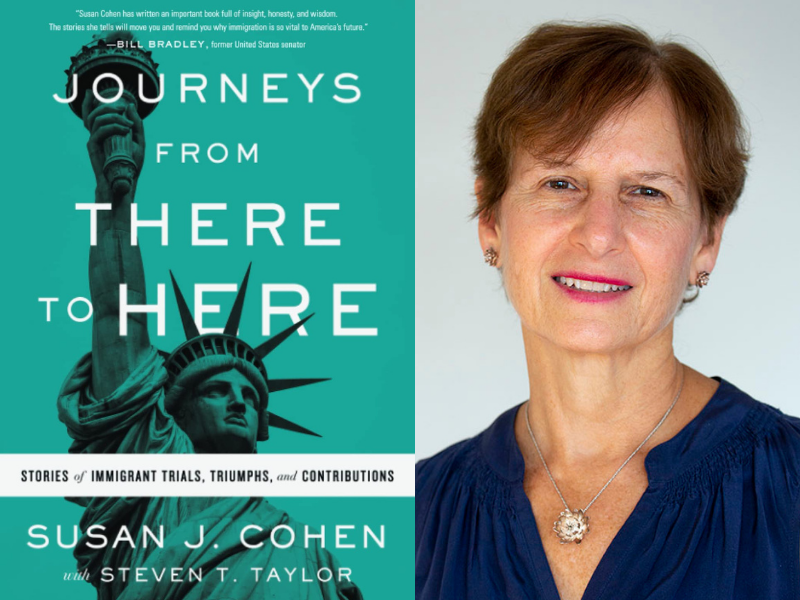 Join the Transnational Literature Series for a virtual event with Susan Cohen to celebrate the release of her new book Journeys from There to Here: Stories of Immigrant Trials, Triumphs, and Contributions. She will be in conversation with author Gazmend Kapllani, who is featured in the book, and Ronnie Millar, executive director of the Rian Immigrant Center.

In this eye-opening collection of immigrant trials, triumphs, and contributions, leading immigration lawyer Susan Cohen invites you to walk with her clients as they share their incredible journeys coming to America while overcoming unimaginable dangers and often heartbreaking obstacles abroad. Cohen masterfully uplifts marginalized voices, laying bare the remarkable realities of staggering hardships and inspiring resilience.

Sprinkled with amusing anecdotes, tense junctures, and heartwarming segments, you will sit front and center at the courtroom learning about US immigration policies and systems—which often become an immigrant’s greatest hurdle—while also discovering the ways unscrupulous American citizens take advantage of those not born in the States. As you ride the ups and downs and follow the zig-zagging twists and turns of their travails, you will discover the many ways immigrants from all over the world give back to their local communities and enrich the fabric of the nation. Finding yourself enmeshed in their stories, you will gain insight, grow in empathy, and come to understand what it truly takes to become an American citizen.

Susan Cohen is a nationally and internationally recognized immigration lawyer, based in Boston. She is the founding chair of Mintz’s Immigration Practice and president of the board of the Political Asylum/Immigration Representation Project. Long active in the American Immigration Lawyers Association (AILA), and the American Bar Association (ABA), Susan often plays an instrumental role in shaping federal and state regulations and other government activity. In 2020 she led a Mintz team that represented hundreds of thousands of foreign students in litigation which overturned U.S. Immigration and Customs Enforcement’s controversial and dangerous COVID-related student visa policy and in 2017 she helped lead a Mintz team that worked with the American Civil Liberties Union of Massachusetts and others to obtain a temporary restraining order on the 2017 Travel Ban. Through her work, she has helped many immigrants obtain asylum. She has won awards for her political asylum work from the Supreme Judicial Court of Massachusetts, the Rian Immigrant Center, the Political Asylum/ Immigration Representation  Project, the Massachusetts Lawyers Weekly, and Mintz.

Gazmend Kapllani is an Albanian-born polyglot author, journalist, and scholar. He is the author of two collections of poetry in Albanian and four published novels (three written in Greek and one in Albanian). His work centers on themes of migration and minorities, borders, totalitarianism, and how Balkan history has shaped public and private narratives and memories. His first novel A Short Border Handbook has been translated and published into ten languages. In 2017 it won the International Literary Prize of the City of Cassino in Italy. His three other novels, My Name is Europe, The Last Page and Wrongland have been published so far in French, Albanian, and Greek. Since 2012 he has been living in the US, where he was a fellow at the Radcliffe Institute for Advanced Study at Harvard University and writer-in-residence at Brown University and Wellesley College. He taught creative writing and European history at Emerson College in Boston. Currently, he lives in Chicago, where he directs the Hidai “Eddie” Bregu Program in Albanian Studies.

Moderator Ronnie Millar is the executive director of the Rian Immigrant Center. Rian, formerly known as the Irish International Immigrant Center, was founded in 1989 and has become Boston’s Welcome Center for immigrants and refugees from around the globe, providing immigration legal, resource and support services, education, advocacy, and welcoming services. He is an immigrant from Belfast, Northern Ireland. He served as center director of Corrymeela, Ireland’s largest peace and reconciliation center. He is a graduate of UMass Boston’s College of Public and Community Services. He is also the vice president of the Coalition of Irish Immigration Centers, and in 2020 helped co-found the Massachusetts Immigrant Collaborative; a diverse group of 15 immigrant serving organizations across the Commonwealth.