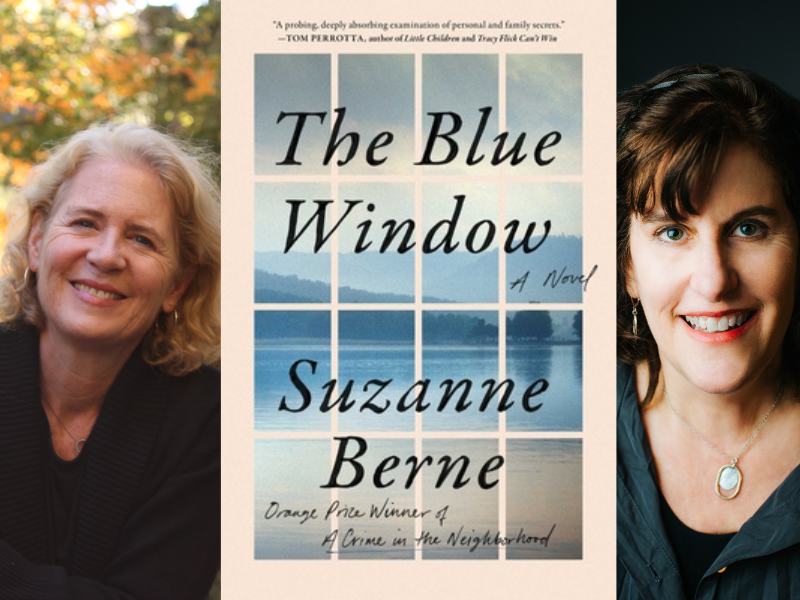 In person at Brookline Booksmith! Celebrate the release of The Blue Window with author Suzanne Berne.

From the Orange Prize–winning author of A Crime in the Neighborhood comes a riveting novel about a therapist whose attempts to unlock the most difficult cases of her life—those of her son, and of her mother—reveal that the bigger the secret you’re concealing, the more it conceals you.

Secrets abound in Lorna’s family. Her mother Marika, who survived the Nazi occupation of Holland, abandoned the family when Lorna and her brother Wade were just seven and twelve years old. The reason she left, and her whereabouts afterward, were shrouded in mystery. As is a darker secret Marika has repressed for nearly seventy years.

Now that Lorna, a respected psychotherapist, has a child of her own, she’s determined to make Marika a part of their lives. But it’s been a struggle for nearly two decades. Lorna’s son Adam is creative, passionate, and uncomfortable in his own skin. Three weeks before the story opens, he abruptly returns home from college after an incident that he refuses to discuss. And he refuses to be called by his name. He refers to himself as “A” for “anti-matter” and insists that Lorna do the same.

The more Lorna tries to get Adam to talk, the more he withdraws. So, when she gets the call that Marika has had a fall and is incapacitated, she sees an opportunity to bond with Adam on the long drive north to Vermont, and to reconnect with her mother by nursing her back to health.

But how do you care for people you can’t understand, and who don’t want to be understood? As Lorna confronts this question, she must face secrets of her own, which she has tried to ignore by spending her life analyzing other people.

A deft and compelling exploration of family dynamics infused with suspense, The Blue Window shows what happens to people who hide from themselves—and the act of imagination it takes to find them.

Suzanne Berne is the author of The Dogs of Littlefield; The Ghost at the Table; A Perfect Arrangement; A Crime in the Neighborhood, winner of Great Britain’s Orange Prize; and Missing Lucile: Memories of the Grandmother I Never Knew, part biography and part memoir. She has also written short fiction and essays that appear in Vogue, The New York Times Magazine, The Guardian, and more. Berne currently teaches creative writing at Boston College and The Ranier Writing Workshop. She lives just outside of Boston with her husband and two daughters.

Moderator Elizabeth Graver’s fifth novel, Kantika, was inspired by her grandmother, Rebecca née Cohen Baruch Levy, who was born into a Sephardic Jewish family in Istanbul and whose tumultuous and shape-shifting life journey took her to Spain, Cuba and finally New York. Kantika is due out in April 2023 from Metropolitan Books. Elizabeth’s fourth novel, The End of the Point, was long-listed for the 2013 National Book Award in Fiction and selected as a New York Times Notable Book of the Year. Her other novels are Awake, The Honey Thief, and Unravelling. Her story collection, Have You Seen Me?, won the 1991 Drue Heinz Literature Prize. Her work has been anthologized in Best American Short Stories, Prize Stories: The O. Henry Awards, The Pushcart Prize Anthology, and Best American Essays. The mother of two young adult daughters, she teaches at Boston College.