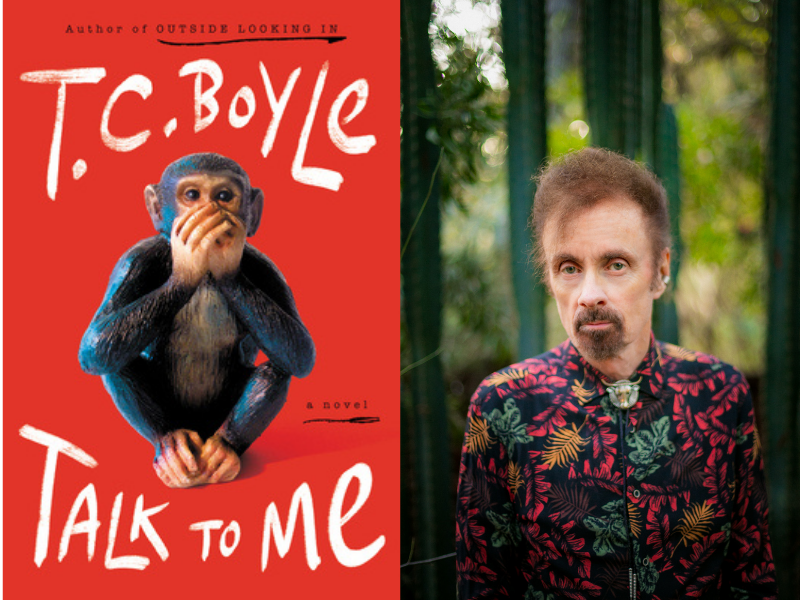 Celebrate the release of T.C. Boyle's Talk to Me!

Books purchased on the registration page will receive a signed bookplate!

When animal behaviorist Guy Schermerhorn demonstrates on a TV game show that he has taught Sam, his juvenile chimp, to speak in sign language, Aimee Villard, an undergraduate at Guy's university, is so taken with the performance that she applies to become his assistant. A romantic and intellectual attachment soon morphs into an interspecies love triangle that pushes hard at the boundaries of consciousness and the question of what we know and how we know it.

What if it were possible to speak to the members of another species—to converse with them, not just give commands or coach them but to really have an exchange of ideas and a meeting of minds? Did apes have God? Did they have souls? Did they know about death and redemption? About prayer? The economy, rockets, space? Did they miss the jungle? Did they even know what the jungle was? Did they dream? Make wishes? Hope for the future?

These are some the questions T.C. Boyle asks in his wide-ranging and hilarious new novel Talk to Me, exploring what it means to be human, to communicate with another, and to truly know another person—or animal…

T.C. Boyle is an American novelist and short story writer. Since the mid-1970s, he has published seventeen novels and twelve collections of short stories. He won the PEN/Faulkner award in 1988, for his third novel, World’s End, and the Prix Médicis étranger (France) for The Tortilla Curtain in 1995. Most recently, he has been the recipient of the Mark Twain Voice in American Literature Award, the Henry David Thoreau Award and the Jonathan Swift Prize for satire. He is a Distinguished Professor of English Emeritus at the University of Southern California and lives in Santa Barbara.