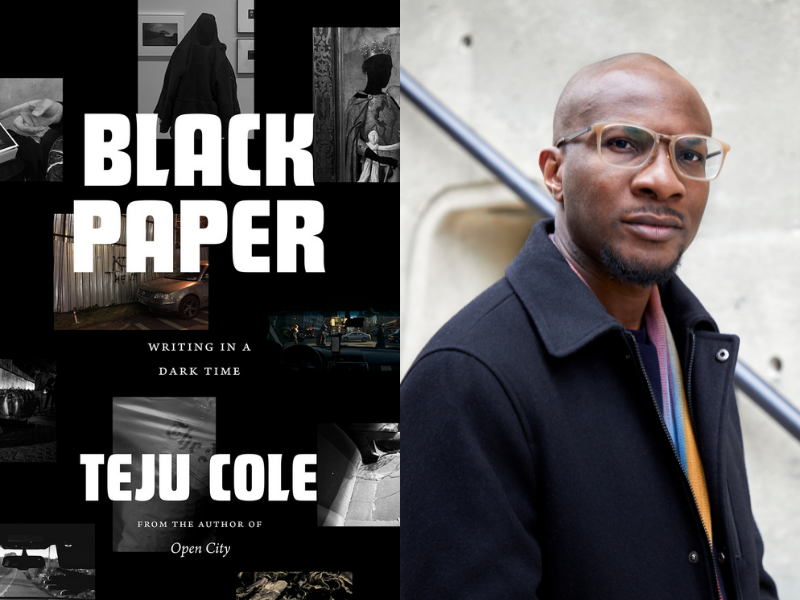 Join the Transnational Literature Series at Brookline Booksmith for an in-store event with Teju Cole to celebrate the release of his two new books, Black Paper: Writing in a Dark Time and Golden Apple of the Sun. He will be in conversation with writer, editor, and founder of the Transnational Series, Shuchi Saraswat.

“Darkness is not empty,” writes Teju Cole in Black Paper, a book that meditates on what it means to sustain our humanity—and witness the humanity of others—in a time of darkness. One of the most celebrated essayists of his generation, Cole here plays variations on the essay form, modeling ways to attend to experience—not just to take in but to think critically about what we sense and what we don’t.

Wide-ranging but thematically unified, the essays address ethical questions about what it means to be human and what it means to bear witness, recognizing how our individual present is informed by a collective past. Cole’s writings in Black Paper approach the fractured moment of our history through a constellation of interrelated concerns: confrontation with unsettling art, elegies both public and private, the defense of writing in a time of political upheaval, the role of the color black in the visual arts, the use of shadow in photography, and the links between literature and activism. Throughout, Cole gives us intriguing new ways of thinking about blackness and its numerous connotations.

Golden Apple of the Sun: In the period leading up to the November 3, 2020 elections in the United States, Teju Cole began to photograph his kitchen counter in Cambridge, Massachusetts. Working in the still life tradition of Chardin, Cezanne, and the Dutch masters, as well as such contemporary photographers as Laura Letinsky and Jan Groover, he photographed every day over the course of five weeks. Unlike those illustrious forbears, Cole left his arrangements entirely to chance, “the bowls and plates moving in their unpredictable constellations.”

What emerges is a surprising portrait, across time, of one kitchen counter in one home at a time of social, cultural, and political upheaval. Alongside the photographs is a long written essay, as wide-ranging in its concerns—hunger, fasting, mourning, slavery, intimacy, painting, poetry and the history of photography—as the photographs are delimited in theirs. The text and photography are interspersed with an anonymous handwritten eighteenth century cookbook from Cambridge. A luminous and humane work, presented with the formal boldness and oblique intelligence we have come to expect from Teju Cole.

Teju Cole is a novelist, photographer, critic, curator, and the author of seven books, which include Open City and Blind Spot, among others. He was the photography critic of the New York Times Magazine from 2015 until 2019. A 2018 Guggenheim Fellow, he is currently the Gore Vidal Professor of the Practice of Creative Writing at Harvard. Author photo credit Maggie Janik.

Moderator Shuchi Saraswat's essays and criticism have appeared or are forthcoming in The Boston Globe, The Boston Art Review, Ecotone, Tin House online, Literary Hub, Arrowsmith, Ploughshares blog, Women’s Review of Books and elsewhere. In 2018, she founded the Transnational Literature Series at Brookline Booksmith and served as its director through 2020. She's currently a nonfiction editor at the literary journal AGNI.