Timothy Goodman with Laura Zigman: I Always Think It's Forever

Timothy Goodman with Laura Zigman: I Always Think It's Forever 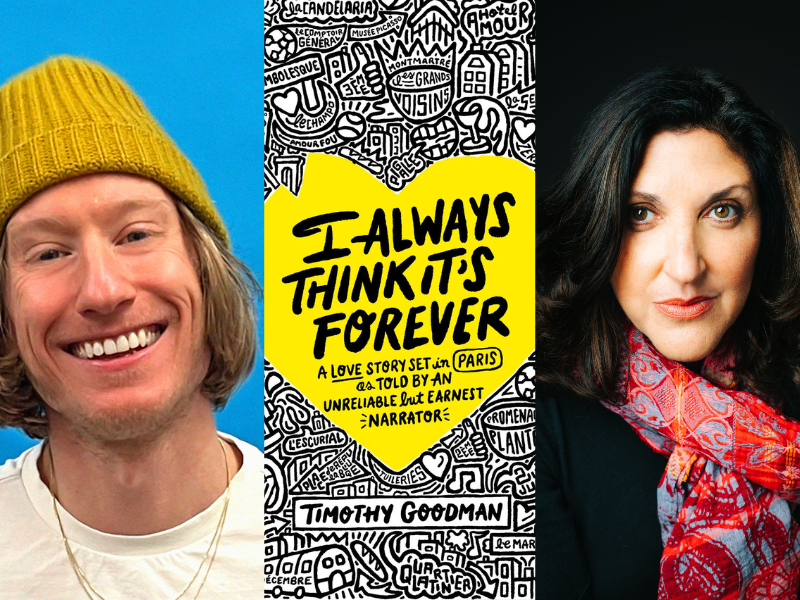 In person at Brookline Booksmith! Celebrate the release of I Always Think It's Forever with author and artist Timothy Goodman, in conversation with Laura Zigman.

This event requires a ticket, which includes a seat at the event and a copy of I Always Think It's Forever. You will be alerted to important details about the program, including safety requirements, cancellations, and book signing updates.

I Always Think It's Forever: A Love Story Set in Paris as Told by an Unreliable but Earnest Narrator

A sweeping, unique graphic memoir about an artist’s year abroad in Paris and how it gave way to an all-encompassing love affair and crushing heartbreak as he wrestled with trauma, masculinity, and the real possibility of hope.

Renowned graphic artist Timothy Goodman planned to do what every young artist dreams of and spend a year abroad in Paris. While there, he fell in love in a way he never had before. For the first time in his life, he let himself be loved and finally, truly loved someone else. But the deeper the love, the more crushing the heartbreak when the relationship eventually fell apart, forcing him to look inwards. He confronted traumas of his past as well as his own toxic masculinity, and he learned to finally show up for himself.

I Always Think It’s Forever is a one-of-a-kind graphic memoir that chronicles it all—the ups, the downs, love lost, and love found—all in the bold illustration style Goodman is best known for, with poetic prose and handwritten wording to accompany the artwork with a touch of humor added as well. It’s a glimpse inside the heart and mind of a man, first focusing on the time Goodman spent in Paris, including diary entries relating his experiences learning about French food, culture, and language. This touching memoir also explores the painful break-up just six months later in Rome. Goodman artfully describes his attempts at learning to love himself in the end, his scars, cuts, warts, and all in a way no book ever has before.

Timothy Goodman is an award-winning artist, graphic designer, author, and public speaker. He’s the author of I Always Think It’s Forever, Sharpie Art Workshop and the cocreator of several projects including the viral blog and book 40 Days of Dating. He teaches at School of Visual Arts, regularly speaks around the world at creative conferences, and enjoys sharing his life on Instagram. He lives in New York City.

Moderator Laura Zigman is the author of six novels including Separation Anxiety (which was optioned by Julianne Nicholson and the production company Wiip (Mare of Easttown) for a limited television series); Animal Husbandry (which was made into the movie Someone Like You, starring Hugh Jackman and Ashley Judd), Dating Big Bird, Her, Piece of Work, and Small World, which was published in January 2023. She has ghostwritten/collaborated on several works of non-fiction, including Eddie Izzard's New York Times bestseller, Believe Me; been a contributor to the New York Times, the Washington Post, and the Huffington Post; produced a popular online series of animated videos called Annoying Conversations; and was the recipient of a Yaddo residency. She lives in Cambridge, Massachusetts.