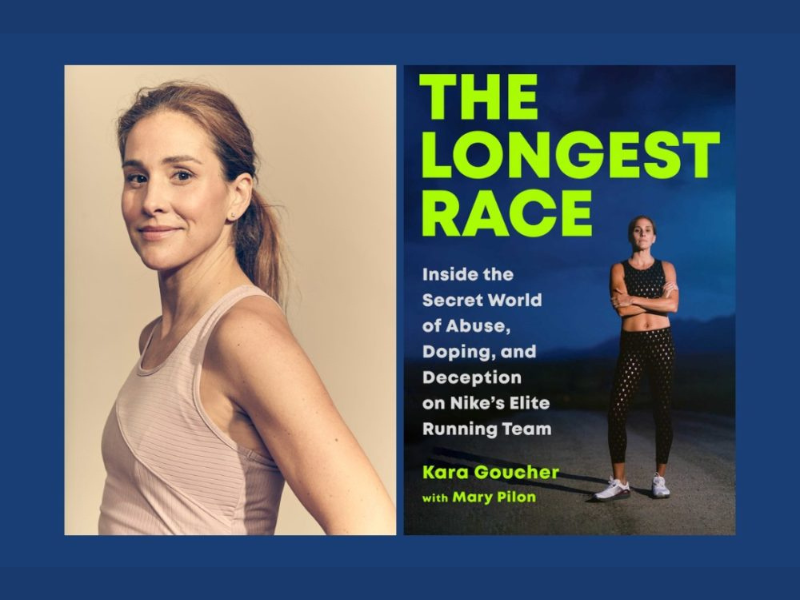 The Longest Race: Olympian Kara Goucher’s memoir on one of the biggest scandals in running history

Kara Goucher is one of the greatest runners in United States’ history. But for the two-time Olympian, World Athletics Championships silver medalist and podium finisher at the Boston and New York Marathons, her hardest challenge might have been taking on Nike, marathon star and coach Alberto Salazar and exposing the darkest secrets in the running world.

Goucher trained at Salazar’s elite Nike Oregon Project and was exposed to a toxic training environment of alleged doping and abuse until becoming a whistleblower to the F.B.I. and U.S. Anti-Doping Agency which resulted in the suspension of the famed coach. Join Here & Now co-host Robin Young for a conversation with Goucher about her new book “The Longest Race: Inside the Secret World of Abuse, Doping, and Deception on Nike's Elite Running Team.”

Copies of the book will be available for purchase. Goucher will sign books after the conversation.

About “The Longest Race”
In this unvarnished and affecting memoir, Olympian Kara Goucher reveals her experience of living through and speaking out about one of the biggest scandals in running.

Kara Goucher grew up with Olympic dreams. She excelled at running from a young age and was offered a Nike sponsorship deal when she graduated from college. Then in 2004, she was invited to join a secretive, lavishly funded new team, dubbed the Nike Oregon Project. Coached by distance running legend Alberto Salazar, it seemed like the opportunity of a lifetime.

Kara was soon winning a World Championship medal, going to the Olympics, and standing on the podium at the New York and Boston marathons, just like her coach. But behind the scenes, Salazar was hiding dark secrets. He pushed the limits of anti-doping rules, and created what Kara experienced as a culture of abuse, the extent of which she reveals in her book for the first time. Meanwhile, Nike stood by Alberto for years and proved itself capable of shockingly misogynistic corporate practices.

Told with stunning honesty, "The Longest Race" is an unforgettable story and a call to action. Kara became a crusader for female athletes and a key witness helping to get Salazar banned from coaching at the Olympic level. Kara’s memoir reveals how she broke through the fear of losing everything, bucked powerful forces to take control of her life and career, and reclaimed her love of running.