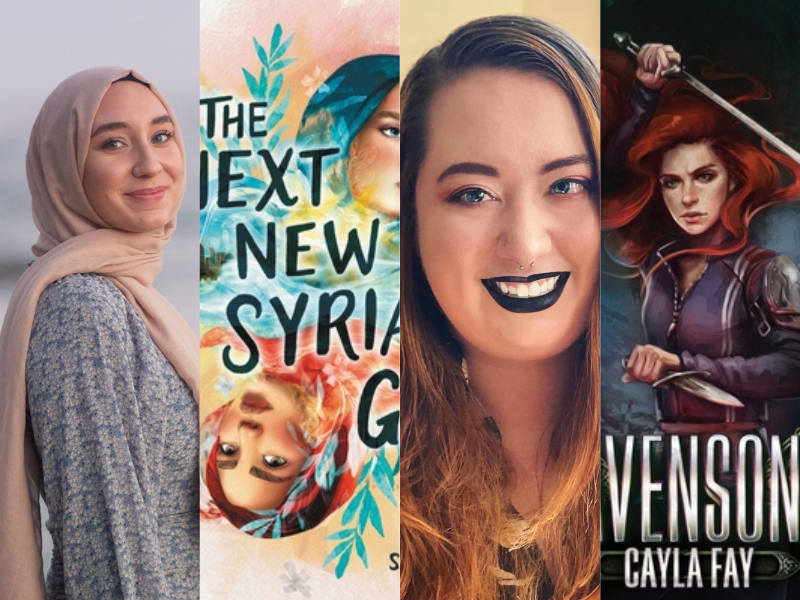 A double book launch, in person at Brookline Booksmith! Ream Shukairy (The Next New Syrian Girl) and Cayla Fay (Ravensong) celebrate the releases of their new young adult novels.

MASKING IS MANDATORY AT THIS EVENT.

The Next New Syrian Girl

Furia meets I Am Not Your Perfect Mexican Daughter in a novel about the unlikely friendship between two very different Syrian girls, the pressures and expectations of the perfect Syrian daughter, and the repercussions of the Syrian Revolution both at home and abroad.

Khadija Shami is a Syrian American high school senior raised on boxing and football. Saddled with a monstrous ego and a fierce mother to test it, she dreams of escaping her sheltered life to travel the world with her best friend.

Leene Tahir is a Syrian refugee, doing her best to adjust to the wildly unfamiliar society of a suburban Detroit high school while battling panic attacks and family pressures.

When their worlds collide, the result is catastrophic.

The Next New Syrian Girl is a poignant and timely blend of guilt, nostalgia, devotion, and bad-ass hijabees.

Ream Shukairy is a Syrian American author. The Next New Syrian Girl, which explores the repercussions the Syrian Revolution both at home and abroad, is her debut novel.

A demi-god who refuses to cohabitate with humans accidentally falls in love with one in the first book of a pulse-pounding teen duology that’s Buffy the Vampire Slayer meets Celtic mythology.

Neve has spent lifetimes defending the mortal world against the legions of hell with her two sisters. Unfortunately for Neve, in this lifetime, she is the only one of the Morrigan—a triad of Irish war gods—still stuck in high school and still without her full power. She’s been counting down the days until her eighteenth birthday, when she finally gets to shed the pretenses of humanity and grow into her divine power.

But then she meets Alexandria. And Alexandria is as determined to force Neve into some semblance of teenage normalcy as she is haunted by her own demons—both figurative and literal.

As they grow closer, Neve decides that humanity—and, perhaps, love—isn’t so detestable after all. Which makes it all the more dangerous when she realizes that something in Hell wants Alexandria, and it’s up to Neve and her sisters to save her before Alexandria’s past catches up to all of them.

Cayla Fay is a coastal New England local, D&D enthusiast, and believer in the power of black lipstick. When not writing, she spends her days walking her shih tzu, Charlie, listening to way too many podcasts, and exploring the defiantly tangled streets of Boston.