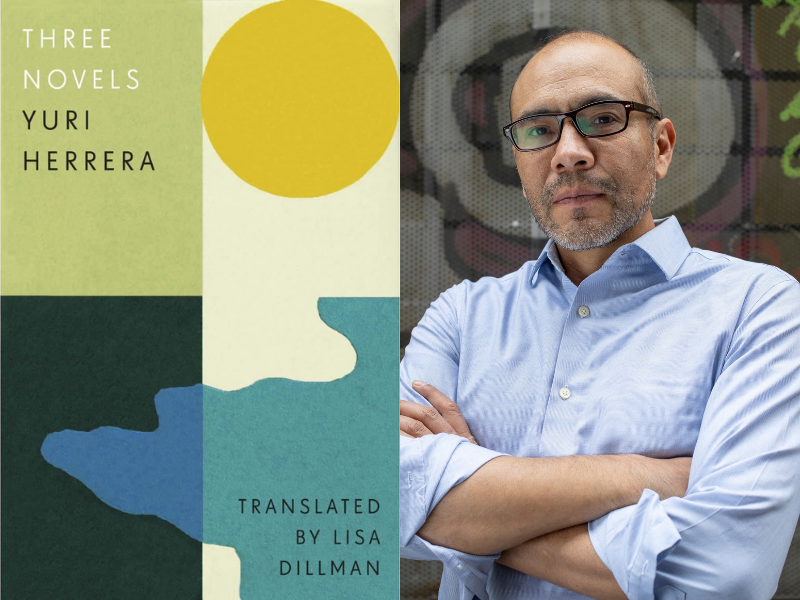 Join the Transnational Literature Series at Brookline Booksmith and Third Place Books for a virtual event with author Yuri Herrera and translator Lisa Dillman to discuss and celebrate the release of Three Novels. They will be in conversation with writer Betina González.

This collectible edition gathers in one beautifully crafted volume the three novels that have made Yuri Herrera’s reputation as one of the best and most revolutionary writers of the new millennium, adding a new preface from the author as well as notes from his Best Translated Book Award-winning translator Lisa Dillman. This is the 100th title published by And Other Stories as part of their 10th Anniversary season!

The Mexico we hear about in the news—with its vicious drug cartels, desperate migrants, and senseless violence—could only ever be one small part of the story. Hailing from a place beyond the stereotypes, behind the hardships of daily life, Yuri Herrera’s characters are castaways from the realms of myth, the epic, the fairy tale. There is the singer Lobo in Kingdom Cons, who loves a drug lord’s daughter; Makina, who crosses borders to find her brother in Signs Preceding the End of the World; and the Redeemer, a hard-boiled hero looking to broker peace between feuding families during a pandemic in The Transmigration of Bodies.

Born in Actopan, Mexico, in 1970, Yuri Herrera studied Politics in Mexico, Creative Writing in El Paso, and took his PhD in literature at Berkeley. His first novel to appear in English, Signs Preceding the End of the World, was published to great critical acclaim in 2015 and included in many Best-of-Year lists, including The Guardian‘s Best Fiction and NBC News’s Ten Great Latino Books, going on to win the 2016 Best Translated Book Award. Also in 2016, he received the Anna Seghers Prize at the Academy of Arts of Berlin, for the body of his work. His latest book in English is the historical narrative A Silent Fury: The El Bordo Mine Fire, also published by And Other Stories. He is currently teaching at Tulane University, in New Orleans.

Lisa Dillman has translated a number of Spanish and Latin American writers. Some of her recent translations include A Luminous Republic by Andrés Barba, The Bitch by Pilar Quintana, The Touch System by Alejandra Costamagna and Yuri Herrera’s four books (she is currently at work on Ten Planets, his fifth). She won the 2016 Best Translated Book Award for Herrera’s Signs Preceding the End of the World and teaches in the Department of Spanish and Portuguese at Emory University in Atlanta, Georgia.

About Our Bookstore Partner